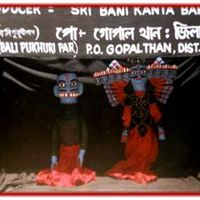 Traditional string puppet theatre from Assam in north-east India. Putala nach (putal, doll, and nach, dance) remains popular in Assam whereas other forms of puppetry and shadow theatre have disappeared. The Ramayana, either in its entirety or by episodes, is performed, as well as scenes from the Mahabharata. The puppeteers are happy to add dialogues or chants taken from bhaona, the local traditional theatre. In this regard, some traditional performances include contemporary educational themes such as the fight against deforestation or family planning messages. The sculpted form of the puppets, their costumes and manipulation vary according to regional style.

The putala nach is also called putala bhaona due to its ancient link (16th century) with bhaona theatre.

Today, there are troupes and traditional families performing putala nach, some of whom are master puppeteers recognized in their communities and sometimes nationally for their contribution to the art of puppetry.