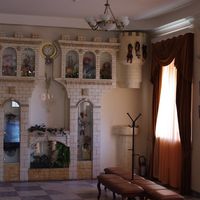 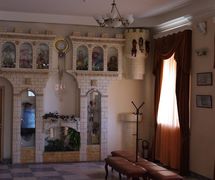 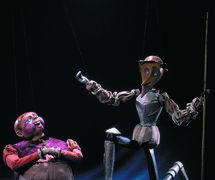 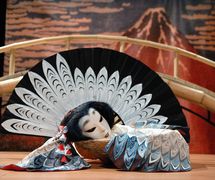 Russian puppet theatre. Founded in 1918 in Petrograd (name of Saint Petersburg between 1914 and 1924) by a group of artists led by Lyubov Shaporina-Yakovleva (1879-1967) initially under the name Petrogradsky teatr marionetok (Petrograd Marionette Theatre), it became the first State puppet theatre in Soviet Russia.

The theatre’s first productions, Skazka o tsare Saltane (The Tale of Tsar Saltan) by Aleksandr Pushkin and Vertep by Mikhail Kuzmin, served the purpose of creating a poetic string puppet theatre inheriting the artistic experiments of the European and pre-revolutionary Russian intellectuals. The goal was not particularly timely, as the young communist State was not interested in inheriting anything but rather in instituting a new ideology. Lyubov Shaporina-Yakovleva’s company staged several productions, notably Tsirk Shardam (Shardam Circus), Krasnaya shapochka (Little Red Riding Hood), Po schuchiemu velenju (At the Wish of the Pike), Puteshestviye Gullivera v stranu lilliputov (Gulliver’s Voyage to the Country of Lilliput). However, in 1930 the company merged with Petrushka Theatre of Evgeni Demmeni, founded in 1924, which was already aligning itself with the new State.

By 1930, Evgeni Demmeni, who until then only performed glove puppetry, had already directed his best glove-puppet productions: Anton Chekhov’s Svadba (The Wedding, 1928) and Nikolai Gogol’s Ssora Ivana Ivanovicha s Ivanom Nikiforovichem (The Squabble of Ivan Ivanovich and Ivan Nikiforovich, 1929). Demmeni was nominated head of the unified company, which he led until 1969. During those forty years he adapted the string puppet to his (Petrushka comedy type) concept of puppet theatre, orienting the company towards parody and caricature but also, in the process, sustaining the genre: up until the mid-1980s, this was the only marionette theatre in all of the Soviet Union.

The company had a remarkable cultural and educational impact. It promoted playwrights who wrote specifically for the genre (the now classic Evgeni Schwartz Evgeny Shvarts and Samuil Marshak wrote their first plays for Demmeni’s company); adapted world classics (Cervantes, William Shakespeare, Molière, Jonathan Swift, Maurice Maeterlinck) for the puppet stage; and it created the first educational facilities for puppetry in the Soviet Union. The company’s excellent designers and sculptors (Tatyana Bruni, Maria Artyukhova, Ivan Pavlovich, Elisaveta Kruglikova, Natalia Sizykh) created puppets that have travelled as part of many European exhibitions and which compose the core of the Demmeni Theatre’s museum.

After the death of Evgeni Demmeni in 1969, artistic directors have come and gone rather rapidly, but Nikita Okhochinsky (1923-2010), actor and museum curator, was instrumental in keeping the traditions.

In 2008, the company’s production, Volshebnoye pyoryshko (Magic Little Feather), based on Japanese fairy tales, won the Russian national Golden Mask theatre award given to the best productions of the past theatre season. It was awarded prizes in the nominations “Best Puppet Performance” and “Best Designer” (director Boris Konstantinov, stage and puppet designer Aleksandr Alekseev).