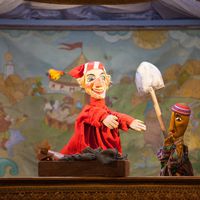 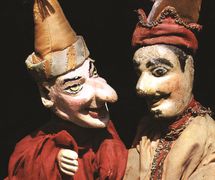 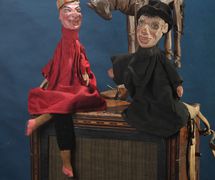 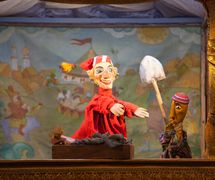 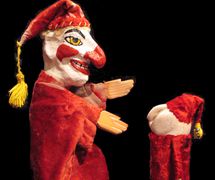 The protagonist of the traditional Russian puppet theatre whose name is used generally to denote glove puppets.

Evidence concerning the existence of Petrushka, the comic hero of the Russian puppet theatre, appeared no earlier than in the 19th century. Historians differ about his origins. Some scholars believe that he is a derivation of analogous European characters; others look to Asia for his roots; still others to Russia itself. In the 17th century, the German scholar and traveller Adam Olearius, while touring Russia, made a drawing of a portable puppet booth in the form of a tunic, which pointed to the oriental provenance of Russian glove puppets. But in the context of representations of this kind the character of Petrushka may very well have appeared later under Western influence.

There is no doubt that the Petrushka Comedy or, in short, Petrushka was performed, at least since the 1840s, with glove puppets above a portable screen. Although it is established from descriptions of performances between the 1840s and 1879 that Petrushka acted alongside Pulcinella, the Russian puppet eventually eclipsed the famous Italian “mask” from the commedia dell’arte.

The Petrushka show consisted of a series of scenes in which the hero was confronted with various characters. The development of the plot was limited and links between scenes were quite loose. Early in its development the comedy included more pantomime than dialogue, but as Petrushka was becoming the sole lead, dialogues-while-acting were inserted into the plot, taking up some of the pantomime space. Petrushka had a loud, shrill voice whose peculiarity resulted from the use of a voice modifier or swazzle (in Russian: pishtchik) while the other characters were endowed with human voices. At any rate, conversational scenes frequently ended with physical actions: a dance, a fight, military exercises, horse riding, and so on. Sometimes Petrushka sat on the edge of the screen singing couplets from a popular song. The number and order of scenes were defined by the puppeteer and depended on his social and professional status, the range of puppets available, the local customs, censorship, and, especially, the nature of the audience.

About fifty texts were collected at the end of the 19th and beginning of the 20th century. Having analyzed forty of these, using a criterion based on the available dramatic situations, the folklorist Anna Nekrylova distinguished twenty-three scenes. The gist of the comedy, meaning the situations which we find in almost every text, is composed of seven scenes. Anna Nekrylova cited them as follows: 1. Entrance of Petrushka; 2. The Fiancée scene; 3. Purchase of the horse; 4. Testing of the horse; 5. The Doctor (The treatment); 6. Instruction of military knowledge; 7. Resolution (Finale).

The group of characters that revolved around Petrushka varied all the time although some were permanent: the Gypsy (Petrushka bought the horse from him); the Doctor or Physician (Petrushka called him after falling from the horse); the Policeman or Officer (who arrived to arrest him or to recruit him into the army and also initiate him in military knowledge); the Fiancée; and a Foreigner (a German, or an Arab taught Russian by Petrushka). Petrushka had no friends and quarrelled with everybody, killing most of them. Only in the Resolution, when terrified by a huge dog or by the Devil or by the Domovoy (“house elf”), Petrushka became sweet as honey and tried to appease the animal (or Devil or Domovoy) using soothing words. But in vain: he invariably, even after defeating the Devil, ended up in the dog’s mouth. Petrushka was left alive in only three of the forty texts examined by Anna Nekrylova. So, unlike all the analogous European shows, the Russian variant ended “badly” for the eponymous hero, although with abundant jokes and laughter on the way.

Petrushka was a fighter, obscene and cynical, immoral and cruel, ridiculing everything and everybody in a “carnivalesque” manner. The puppet of Petrushka had a big nose giving him a distinctive profile, a hump (sometimes two, one in front and one on the back). His face was illuminated by a threatening smile. Usually he wore a bonnet and red shirt. Sometimes below his shirt he was provided with legs, used only in the performance when the puppeteer would have Petrushka sit on the edge of the stage (playboard) and throw his legs into view. In this pose, Petrushka sang popular songs or talked with the Sharmanshik, the barrel-organ player, who stood in front of the screen. The Sharmanshik was the second lead of the show. He performed a number of important functions: provided musical accompaniment, sustained a dialogue with Petrushka, thus influencing the action, and served as a medium between the audience and the stage, “translating” Petrushka’s difficult-to-understand language, or collecting money for Petrushka’s wedding.

The only props of the Petrushka Comedy were a horse and Petrushka’s stick, specially divided (split) to make its blows noisier. The Russian puppet booth (shirma) from the 19th century hid the player completely from head to foot, its wooden frame covered with printed calico. It had no portal (proscenium arch).

At the beginning of the 20th century, the Petrushka Comedy quickly degenerated, along with other forms and genres of traditional folk culture. The spirit of the fairground moved into another cultural space – to the variety stage and cinema. Having left the market place, Petrushka turned into, on the one hand, a children’s puppet character and, on the other, a romantic hero played by Nijinsky in the famous ballet by Igor Stravinsky.

The 1917 October Revolution revived the Petrushka theatre for a while, but a very different hero, only named the same, took the stage. Having lost his nihilism and independence, but still wearing his red shirt (now, however, the red shirt was seen as a revolutionary banner), Petrushka was used by the Soviet State as a propaganda tool. The old hero appeared now as a new, “positive” hero in activist sketches and edifying shows for children up until the late 1920s.

In the 1920s and 1930s, an attempt to revive the folk roots (as opposed to the overused political capabilities) of Petrushka was made by the artist couple, the Efimovs (see Nina Simonovich-Efimova). But it was in the 1980s, with Mikhail Gorbachev’s perestroika (reconstruction) that there arose a renewed interest in Russia’s folk traditions. Thus, in the early 21st century around ten Petrushka shows could be seen on stage in Russia. The most faithful to the model is that of veteran actress, Tatyana Chunakova, with inherited, century-old puppets. But the best known of these are of Anatoly and Larissa Arkhipov, considered the best-adapted Petrushka Comedy to modern times. There are also the Petrushka shows of Irina and Sergei Kuzin, and of the duo, Elena Slonimskaya and Aleksandr Gref. Aleksandr Zabolotny, using the character in a satirical vein, found Petrushka in various characters – from the Russian fairy-tale spherical bread roll, Kolobok, to Hitler.