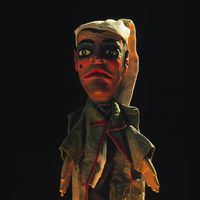 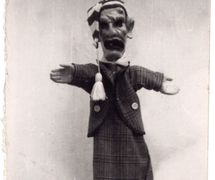 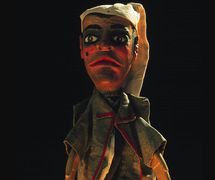 Character of the Italian puppet theatre (Modena, Emilia). Sandrone’s origins go back to Luigi Campogalliani who based him on the peasant world of his time (the end of the 18th century), still rather ignorant, but already not without some pretensions to wisdom. Hence the awkwardness of the character who held forth in a language full of solecisms, expressing opinions that bordered on paradox, but also containing truths that corresponded to the expectations of the audience. No doubt this is why the “mask” (maschera, stock character) of Sandrone who appeared independently of the commedia dell’arte enjoyed ever greater success and was gradually taken up by numerous puppeteers.

One of these was Giulio Preti, son-in-law of Luigi Campogalliani, who endowed the character with traits that drew audiences. His costume was that of a typical peasant, a woollen cap with red and white strips, striped stockings, breeches, a dark coat and a spotted waistcoat; his physical features are also those of a peasant: grey hair, a large gnarled face and a big mouth with teeth missing. Sandrone is impetuous and sincere, rather rough in his manners, but without a trace of vulgarity or unkindness, and always ready to take the part of the weaker.

Giovanni Cavicchioli, who has studied the character of Sandrone with passion, claims that in reality Giulio Preti made the character like himself, calm, patient and tolerant, but not disposed to put up with injustice or abuse of power. Giulio Preti’s Sandrone does not indulge in political satire, does not touch on religion, and the only targets of his jokes are the most obvious and commonplace social differences. Preti gave Sandrone a wife, Pulonia, a placid countrywoman, and a son, Sgurghéguel (Sgorghiguelo) who nearly always finished his scenes with a stick in his hand, ready to strike in every direction.

Filipo Cuccoli from Bologna moved the puppet Sandrone into the town and set him alongside the young Fagiolino, a superficial character, but a spontaneous and sympathetic one, always ready to defend the weak. Cuccoli’s Sandrone, unlike Preti’s, made verbal attacks on the best-known and most obvious personalities of the town, and in dong so lost some of his good nature and became more acid.

Sandrone lived on in the Emilian puppet repertoire, taking part in historical and political events, and was involved, for example, in the story of the famous brigand

Passatore. He continued to be successful in the hands of Giulio Preti’s sons, and with Francesco Campogalliani, Italo Ferrari from Parma and Gottardo Zaffardi among others.