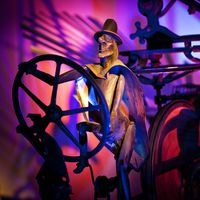 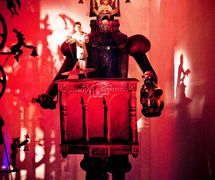 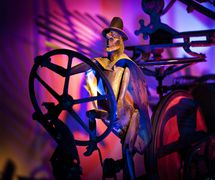 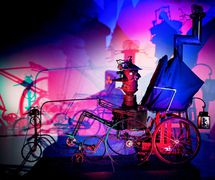 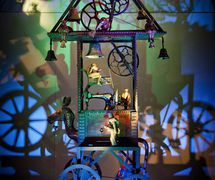 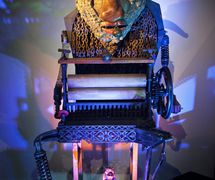 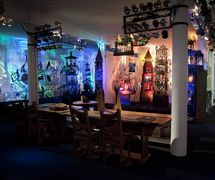 British theatre company. Unique mechanical theatre based in Scotland created by sculptor-mechanic Eduard Bersudsky (b.1939 in Saint Petersburg) with theatre director Tatyana Jakovskaya (b.1947), and light and sound designer Sergey Jakovsky (b.1980). Sharmanka is the Russian word for “hurdy-gurdy”.

Bersudsky is a self-taught artist who, in the 1970s, began producing his “kinemats” – kinetic sculptures driven by electrical motors and controlled by sophisticated electro mechanical devices, incorporating pieces of old furniture, metal scrap and grotesque carved figures. Until 1989 his “kinemats” could be seen only by a few friends and acquaintances in his single room in a communal flat in Leningrad.

In 1988, with Tatyana Jakovskaya, he founded Sharmanka Kinetic Theatre, which premiered in Saint Petersburg in 1990. The mechanical movement of the “kinemats” was supported with music, light and shadow play. The third member of the team, Sergey Jakovsky, joined Sharmanka at the age of 13 and gradually became responsible for the light and sound design as well as the technical management.

In 1993, Sharmanka was driven out of Russia by economical depression and lack of support for their art. At this time Glasgow Museums bought some of its exhibits for the Glasgow Gallery of Modern Art and invited it to make their own show at the McLellan Galleries. In 1996, the Sharmanka Kinetic Gallery and Workshop was opened in Glasgow Merchant City. Regular performances of the kinetic sculptures are attended by thousands of visitors every year. New “kinemats” are added to the show annually, while at the same time Sharmanka undertakes commissions and exhibitions nationally and internationally.

In 1999, Sharmanka (in co-operation with Tim Stead and Annica Sandstrom) was awarded The Millennium Festival Grant to build The Millennium Clock for the Royal Museum in Edinburgh (now in the collection of the National Museums of Scotland). In 2005, Eduard Bersudsky received the prestigious “Creative Scotland Award”.