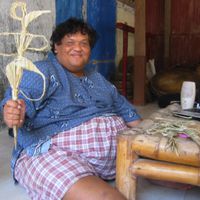 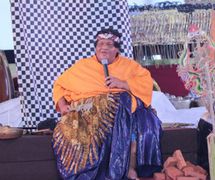 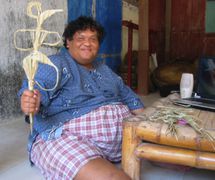 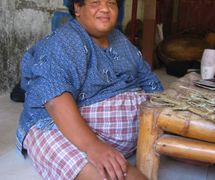 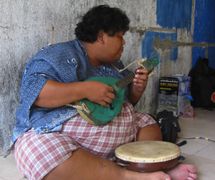 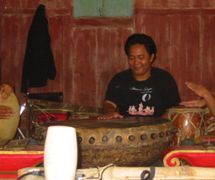 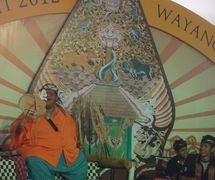 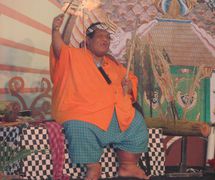 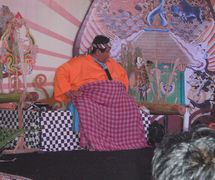 Indonesian puppeteer-performance artist of Java. Born into a dalang family, Ki Slamet Gundono (Ki is an epithet of respect accorded to a senior dalang) attended a madrasa (Islamic school) in Lebak Siu, and continued his tertiary studies at ISI Surakarta (Institut Seni Indonesia, Indonesian Institute of the Arts, in Surakarta/Solo), graduating in 1999. He is best known for his wayang suket, which he first performed in 1997. Using the woven grass wayang that are considered children’s toys, Slamet tells traditional stories in iterations which combine sometimes over-the-top acting, modern performance art, and stand up comedy. A charismatic performer of enormous (150 kilo) girth, Slamet may melt into tears when playing a mother who has lost her son but bounces back for the clowning interactions with the audience, often making asides as he talks over their heads with viewers. He performs without a screen; his musical accompaniment combines a stripped down gamelan (gong-chime orchestra), drum set, and Western instruments.

Slamet Gundono began his performance career with “multimedia wayang”. For Fourteen Days With Bisma (based on an episode of the Mahabharata) he widened the shadow screen, used seven dalang, and eschewed wayang‘s difficult to understand language. In his hands, the ascetic priest Bisma startled viewers with his erotic dreams. Next, Slamet explored wayang gremeng, which foregoes formal puppets and gamelan altogether: voices become gamelan and random objects picked up in the moment can play the characters. Then came his current performance style, which combines gamelan and western instruments, eliminates the screen, and focuses on the performer-storyteller. Saté Drupadi (Lady Drupadi as Kebab, 2000) deals with a revival of cannibalism in Kalimantan (Borneo) when a group of local Dayak people, outraged that Madurese immigrants had settled on their land, killed and ate some of these “newcomers”. Slamet compared the skewering of human flesh to the episode in the Mahabharata where the Kurawa brutally attempt to rape Drupadi (wife of the Pandawa prince). Slamet saw these two instances – both the epic and the contemporary – as horrific examples of human kind’s tragic failure to show humanity to others.