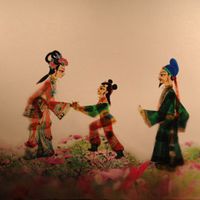 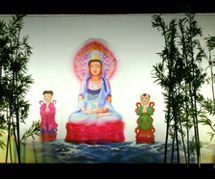 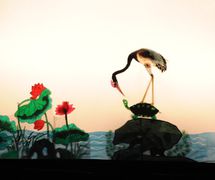 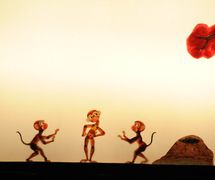 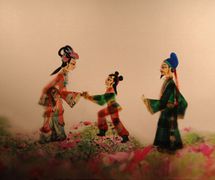 The troupe preserves many traditional stories including Yang Family Generals, Hu Family Generals, The Water Margin, White Snake, and Cowherd and the Weaver Girl. It also presents animal fables such as The Crane and the Tortoise and Panda Mimi. Hong Kong Phoenix Pictures filmed part of The Monkey King Thrice Beats the White Bone Demon for Television and Central Newsreel, and Documentary Film Studio made a film about the company titled Tangshan Shadow Puppetry.

On September 1987, the troupe participated in the First Chinese Art Festival. In the same month, it won first prize in performance in the Shadow Puppetry Invitational Tournament. In 1982, shadow artist Qi Yongheng was invited by UNESCO to lecture in France at the Institut International de la Marionnette in Charleville-Mézières and, in 1985, he presented in the United States at Disney World. In September 1992, the troupe was selected to go to Beijing to participate in the Eleventh Asian Games Art Festival. At the Golden Lion Award National Shadow Puppetry Competition organized by the Ministry of Culture in September 2003, the troupe received the gold medal award. In 2010, the troupe took part in the Sixth Performance of Outstanding National Children’s Shows and won a merit award and later also won a gold medal at The Golden Lion 3rd National Puppet and Shadow Show Competition.

Tangshan Shadow Puppet Troupe makes innovations based on tradition by fusing modern fluorescent lighting into traditional shadows. Their innovative techniques can help create the illusion of three-dimensionality in the two dimensional shadow form and their work evokes a magical-mystical atmosphere. Two traditional plays, Legend of the Goddess of Mercy and Chenxiang Saves His Mother, successfully mix tradition and innovation.

The company has been invited to give performances in more than thirty countries including the Netherlands, Japan, Italy, Germany, Austria, and Greece.

Tangshan Shadow Puppet Troupe was one of the founding troupes of UNIMA China in 2002.