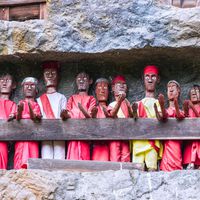 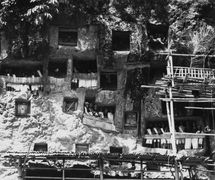 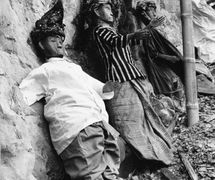 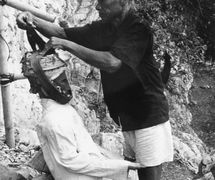 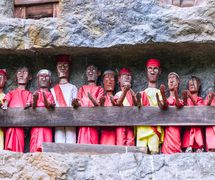 Funeral effigies of the Toraja (also Toradja) of Tanah Toraja, Sulawesi (the Celebes), Indonesia. After the death of a person of high rank, the sculptor makes a head in wood (breadfruit or jackfruit wood, for example) that is attached to a bamboo rod to which are affixed two bars that form the structure of the shoulders and the height of the effigy representing the deceased. This “skeleton” is then covered with various items of clothing that belonged to the dead person. Some of the tau-tau effigies are finely carved: the technique is simple and the head-trunk-arms are carved from a single block, while the pelvis and legs from another block of wood. The forearms and hands are connected and mounted in place with a dowel-pin. If the effigy is to represent a female, the carver decorates it with necklaces.

The effigy is then placed on the ground near the house where the body is laid out. From that moment the effigy becomes the object of a complex ritual conducted by many participants. The women offer their lamentations around the tau-tau. After invoking the genealogy and asking for the intercession of the ancestors, the “puppet” is undressed. The head is placed in the attic in order to affect a good harvest.

The next day, after a long ceremony, the corpse of the deceased and the effigy are carried to the tomb situated in a high place, if possible on a mountainside or else in a specially built gallery or “house”. As can be seen today at Lemo and Londa, limestone cliffs have been utilized for what could be called a multi-storeyed cemetery with the tombs of the most noble at the cliff’s pinnacle. For the Toraja the tau-tau are statues of great significance. Like the dead, they are revered; they are decorated, handled with care, cried over, and carried. They receive offerings and their role is to help the living to good health and long life.

Since the 1980s, the tau-tau have become popular on the international “art” market, forcing many villagers to hide the ancestral figures to prevent their “ancestors” from being kidnapped and sold as ethnic art objects. Grave robberies, tourism and recent religious changes have all contributed to altering the funerary patterns of Toraja culture.