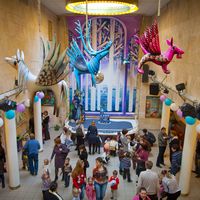 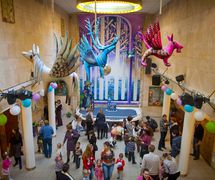 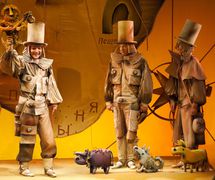 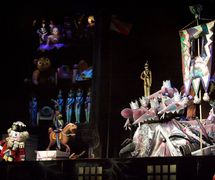 Russian puppet theatre based in Saint Petersburg. Teatr Skazki (Theatre of the Fairy Tale) opened on December 31, 1944 in Leningrad (now Saint Petersburg) with a New Year’s Eve performance for children. From 1944 to 1958 the theatre built its repertoire on Elena Gilodi’s productions of Ekaterina Cherniak’s plays, with actors Olga Lyanzberg and Georgy Turaev. The theatre underwent a rebirth from 1968 to 1980 under Yury Eliseev, playwright, actor and director, who employed high production standards that continue to today.

The theatre’s repertoire of classic fairy tales is well known for the dramatic qualities of the individual productions, such as Estonian director Rein Agur’s Kuda ty, zherebyonok? (Where Are You Heading, Little Stallion?, 1981), winner of the Varna (Bulgaria) puppet festival prize.

Since 1987, the theatre has been led by Igor Ignatyev. The productions he staged in collaboration with his wife, designer Anna Ignatyeva – Iz liverpulskoy gavani (From the Liverpool Harbour, 1988); Skazka ob Ivane lentyaye (The Tale of Ivan the Lazy, 1991); Sinyaya ptitsa (Bluebeard, 1993) – were generally all based on a single principle: the performance of human storytellers, with puppets only illustrating the action. Igor Ignatyev always writes his own scenarios exclusively for his company with resident composer Mikhail Bebrish. His Schelkunchik (Nutcracker, 2000), winner of the State Prize of the Russian Federation, demonstrates a command of grand spectacle in the national puppet theatre. It combines the interplay of various puppetry styles with computer animation and live action. Snezhnaja koroleva (The Snow Queen), based on Hans Christian Andersen’s fairy tale, directed by Igor Ignatiev with new incidental music composed by Nicklas Schmidt, premiered in December 2009.