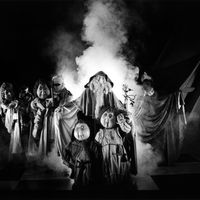 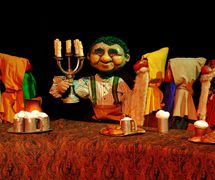 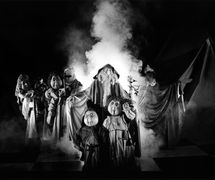 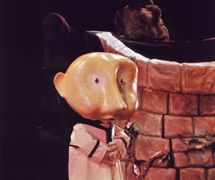 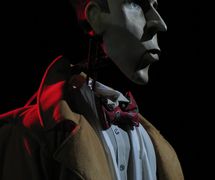 Canadian puppet company founded in 1971 in Montreal. Théâtre Sans Fil (Theatre Without Strings) has toured the world with its productions always involving giant puppets. More than two and a half million spectators have attended the company’s shows, which are often presented in the language of the country visited. Inspired by the traditional Japanese art of Bunraku theatre, TSF has distinguished itself by its treatment of giant puppets and a modern approach to scenic design and music. André Viens, co-founder of the company, holds the position of both artistic director and stage director.

The music, often original, is composed by professional musicians sensitive to the requirements of the giant puppet. The puppeteers, dressed in black, might manipulate between twenty-five to seventy-five puppets in a performance, depending on the production. Two to five technicians work back stage: sometimes from the upper grid and at other times from under the stage. Imaginative fantasy and dream worlds drawn from myth, legends and epics guide the TSF in its choice of texts. J.R.R. Tolkien’s The Hobbit (1997) and Lord of the Rings (1985), Henriette Major’s Jeux de rêves (Dream Play, 1992) and La Couronne du destin (The Crown of Destiny, 1995), Le Grand Jeu de nuit (The Great Night Play, 1992) – an outdoor multimedia sound and light show created for the 350th anniversary of the founding of Montreal – and Ravel “Boléro et L’Enfant et les Sortilèges” (Ravel “Bolero and The Child and the Spells”, 1999), a lyrical fantasy for giant puppets, are just a few of the shows presented by the TSF to audiences of all ages.

In 1996, Théâtre Sans Fil received a special Masque (Mask) Award from the Académie Québécoise du Théâtre (Quebec Theatre Academy) to celebrate the record number of performances of The Hobbit and the company’s twenty-five years of existence.