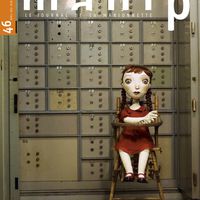 Association based in Paris, it includes the French centre of UNIMA. THEMAA was born in 1993, from the fusion of UNIMA-France and the Centre National de la Marionnette (CNM, National Centre of the Puppet), imposed by the Ministry of Culture, its main source of funds.

The French centre of UNIMA was founded in 1961 while the CNM, which was a grouping of professional companies, chosen and co-opted, was initiated in 1971. Those two organizations merged in 1993 to become THEMAA. The presidents that have followed since that date have always been professional puppeteers: Philippe Genty, Sylvie Baillon (Ches Panses Vertes), Dominique Houdart (Houdart-Heuclin), Michel Rosenmann (XZART), Alain Lecucq (Papierthéâtre), Pierre Blaise (Théâtre Sans Toit).

Both a federation and a force for new initiatives and proposals, THEMAA has organized a number of events: public thematic debates, regular workshops between contemporary authors and puppeteers in association with the Centre National des Écritures du Spectacle (National Association of Theatre Writers) at the Chartreuse in Villeneuve-les-Avignon since 1999, national workshops directed by creative producers – François Lazaro in 2001, Claire Dancoisne (Théâtre La Licorne) in 2003, Philippe Genty in 2005. Among the thought-provoking issues developed by the association have been an initial training period followed by on-going training, analysis of the economic and artistic situation of companies, networking between those areas specializing exclusively in puppetry and others that regularly programme this artistic form.

The association is also publisher of the magazine Mû (from 1993 to 1999), followed by the quarterly Manip (since 2005); the collection Carnets de la marionnette in collaboration with Les Éditions Théâtrales (Theatre Publications); Les Fondamentaux de la manipulation (The Fundamentals of Manipulation, 2003) and Pédagogie et Formation (Pedagogy and Training, 2004), both under the direction of Evelyne Lecucq, and Le Patrimoine (Heritage, 2005) under the direction of Simone Blazy.