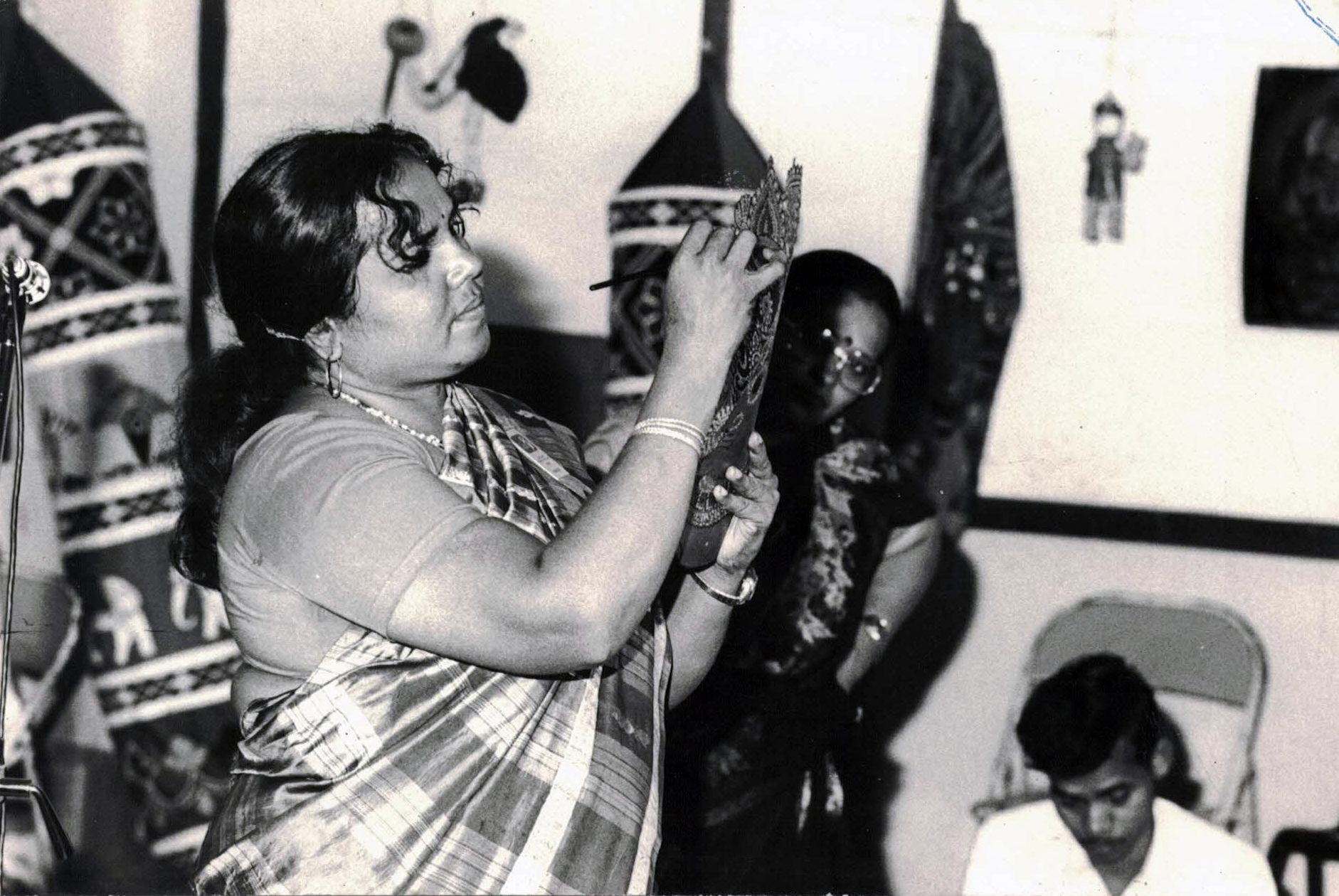 Traditional shadow theatre from Tamil Nadu in south-east India. In the Tamil language, tolu (or thol) means leather and bommalatam signifies figure, doll or puppet. In the state of Tamil Nadu, the tolu bommalatam shadow theatre is performed by different members of the same family. The troupe varies between three and nine people. The families who perform shadow theatre reside in the centre and south of the state and belong to the Mandikar community who came from Maharashtra in the 18th century during the rule of the Thanjavur Maratha kingdom. A growing interest for this kind of theatre came about in the Tamil Nadu southern regions and the leaders of Thiruvathavur supported shadow theatre.

Even though the Mandikar puppeteers have lived in Tamil Nadu for more than two centuries, they communicate between themselves using the Marathi language while performing in the Tamil language. Inflections in voice and the signification of sounds remain an essential element for these puppeteer-storytellers. The Mandikar divide the performing field between families, with some staying faithful to their fondest regions. The allocation takes place during the annual Mandikar reunion. April and May are the best months for performing as they immediately follow the harvest.

The Ramayana epic, the story of Nallathangal, and the wedding of the god Murugan and the goddess Valli constitute the repertory of these nomadic troupes. A family can perform during ten consecutive nights depending on the financial situation of the village. In the past, the village chief would make a sort of contract with the puppeteers and would determine with them the selection of episodes, the number of nights and the remuneration that the entire village community could pay. Today, these transactions no longer take place. A performing family comes into a village, rents a hut for a certain number of performances, lives there during the day and performs there at night.

A 1-metre length of white cotton is stretched to form a screen. Behind the screen, the main puppeteer sits on the ground with his male assistant. A light bulb or a hurricane lamp lights the figures from one side and projects their shadows on the other, facing the spectators who view them on the screen. The perforated leather of the figures allows the public to recognize the characters that dance in the light. Each figure is held against the screen by bamboo rods directly fixed on the surface of the leather.

The puppeteers themselves make the leather figures, which, in the past, were made from doeskin. However, since a 1970 decree, which outlaws the hunting of does, the figures are made out of goat or sheep skin. Immediately after having purchased the skin, the puppeteer places it into a lime solution then dries it in the sun and lets it cure in a covered space for several weeks. He then marks the tracings with charcoal and uses metal tools to make perforations on the skin, which correspond to the ornaments of the characters copied from ancient figures or images from a calendar. The colouration of the figures is of secondary importance as the skin remains opaque and thick, and thus the tints cannot be seen by the spectators. It takes approximately five years in order to manufacture a set of forty to fifty figures. The older worn out or damaged figures are never burnt or thrown out.

During the performance, the puppeteer animates the figures and speaks for them as well. The members of his family assist him in the manipulation. The main puppeteer’s wife, or if unavailable, another woman, sits in front of the screen on the audience side and plays the harmonium. She repeats each of the puppeteer’s sung phrases and reacts to all dramatic turns of events and jokes and comments. Her role is of great importance as she sustains the dramatic effect. A mridangam (two-skinned drum) player gives the rhythm to the singing. The puppeteer has a wooden plank attached to his foot, which he bangs on the ground providing a sound effect to underline the fights sequences or the flight of characters. His assistant uses a kind of mouth organ, the pavra, to represent demons and traitors with appropriate sounds. Sometimes the main puppeteer ties ankle bells (kakker) to give yet another sound dimension – to enhance the grace of dancing girl puppets.

There is the belief in current day Tamil Nadu that an episode of the Ramayana or the story of Nallathangal performed by the tolu bommalatam will bring rain and abundant crops and will protect society from evil spirits. However today, overshadowed by popular cinema and television, the puppet troupes are struggling with poverty. With a dwindling demand for traditional entertainment, the puppeteers have even resorted to making dance performances in order to survive.

Today, there are troupes and traditional families performing tolu bommalatam, some of whom are master puppeteers recognized locally and sometimes nationally for their contribution to the art of puppetry.