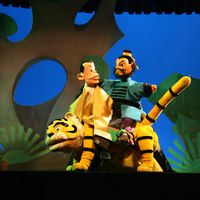 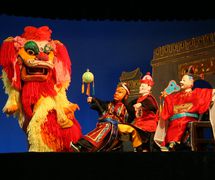 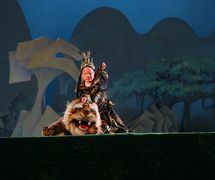 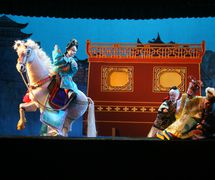 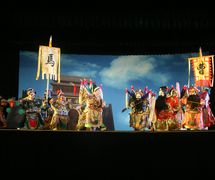 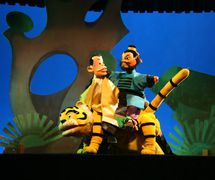 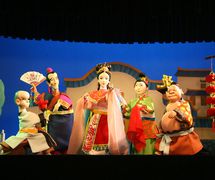 Glove puppet theatre company in south-eastern China based in Zhangzhou (Fujian Province). The current troupe, which performs Fujian style glove puppetry, was founded in the 1950s. The art itself was well established by the Ming Dynasty (1348-1644), and performances were given on elaborate wooden stages with finely carved puppet heads and exquisitely embroidered costumes. The roles of its characters correspond to the xiqu (traditional theatre) types of dan (female), sheng (male), jing (painted face), and chou (clown). Troupes that remained somewhat active during the War of Resistance to Japan (1937-1945) regrouped after the establishment of the People’s Republic of China in 1949. By the 1950s, glove puppetry enjoyed enormous popularity with both peasants and Party leaders.

In 1960, Zhangzhou Puppet Troupe presented scenes drawn from Water Margin at the Second International Puppet Festival in Bucharest, Romania, winning the gold medal. In 1987, it performed in London and, in 1997, in Taiwan. In 2006, the glove puppets of Zhangzhou Puppet Troupe were listed among the first batch of National Intangible Cultural Heritage genres to be safeguarded.

Plays in the repertoire include traditional works such as Eight Immortals Crossing the Ocean; Yue Fei, the story of a famous general and patriot; Li Kui, the Black Cyclone, the story of a martial hero from Water Margin; and the demonstration piece, Art in the Palm. The company also developed new works such as the 2007 Little Red Army Soldier on the Long March, which was serialized in 52 installments on television. The company has created two hundred films and television programmes in conjunction with Beijing Film Studio, Shanghai Animation Film Studio, and CCTV (China Central Television).

The company has presented in Beijing dozens of events for both national leaders and foreign dignitaries. It has toured to more than thirty countries in Asia, Europe, the United States, Australia, and Africa. Leaders such as Chairman Mao Zedong, Premier Wen Jiabao, and Guo Moruo have commended the artistry of the figures.

At the 21st UNIMA Congress and World Puppetry Festival held in Chengdu in 2012, the company presented Daming Mansion, Havoc with Horse Selling, and Two Hunters to great acclaim.