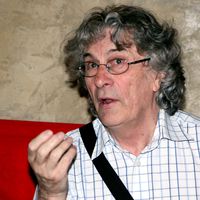 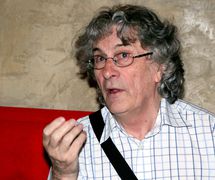 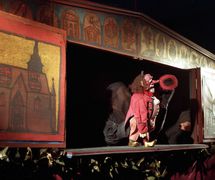 Croatian creator of puppets, puppet theatre and film director, scenographer and costume designer, painter, sculptor and graphic artist. Zlatko Bourek completed his studies of sculpture at Likovna akademija (Academy of Arts) in Zagreb in 1955, tried his hand as a cartoonist, and quickly moved on to the theatre as a scenographer and costume designer. He joined Zagrebačka škola crtanog filma (Zagreb School of Animated Films), shooting a number of films with distinctive animation and visual imagination on the basis of his own grotesque and bizarre scripts.

His first puppet show Orlando Maleroso (based on Salih Isaac’s story) was presented at Dubrovačke ljetne igre (Dubrovnik Summer Festival) in 1977. He has been the creator of the puppets and scenography, and is director or co-director of all his shows. The recognizable grotesqueness, and, frequently, the lasciviousness of his puppets led him towards puppet shows intended exclusively for adults, rarely for children. The most famous of his productions is the puppet adaptation of Tom Stoppard’s paraphrase of William Shakespeare’s Hamlet, created at Teatar &TD (&TD Theatre) in Zagreb in 1982. In world terms, this is the best-known show in the history of the Croatian theatre, and it has toured practically all continents.

Bourek’s work in puppetry is mainly in two techniques, to which he has introduced some innovations. The first is a modification of the kuruma ningyō in which the actors sit on mobile chairs, using their legs as extensions of the puppets. The second is the glove puppet, in a fairly large version, which – with animation – can open its mouth.

Among his other shows, it is worth mentioning the following: Škrtac (The Miser, Dubrovnik, 1983) and Dundo Maroje (Uncle Maroje, Dubrovnik, 1990), both based on the comedies by Marin Držić, Advokat Pathelin (Maître Pathelin, Zagreb, 1992), Povratak vojaka (The Return of a Soldier, Zagreb, 1995) by Luko Paljetak, and Namišljeni bolnik (The Imaginary Invalid, Ljubljana, 1998) after Molière.