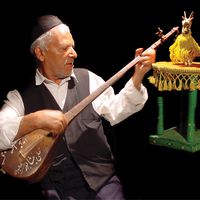 Iranian jigging puppets (French: marionnettes à la planchette). Arusaki is a genre where a human or animal puppet dances rhythmically on a fixed base accompanied by the musician-manipulator’s playing of the tombak (tonbak or zarb: drum), tar (lute), dutar (two-stringed lute), or similar instrument. Melodies and playing are specific, fitting with the puppet movement. The puppet string attaches to the player’s fingers and by pulling and releasing the puppet its spine moves up and down.

The most famous version of arusaki is qei nane (mother-in-law). The form may be called bazi-ye šekar in eastern Iran, especially in Khorasan where it is believed to be linked to hunting rituals and is still found in Nishapour and Sabzevar. There the figure is a goat, ram, or deer and the string attaches directly to the dutar so that the animal moves to the playing of the musical instrument, standing, lying, and sitting as the player performs local songs. The genre is called Mina naz dareh in Shiraz. Mina is a beautiful girl, represented by the figure, who the singer/player praises as the puppet representing her dances. In Turkmensahara, the puppet is called ghourjogh. Here the puppet’s back is attached to the right hand of the bakhshi (storyteller/singer in Turkmensahara). As he plays the dutar, the figure moves in time to the music.