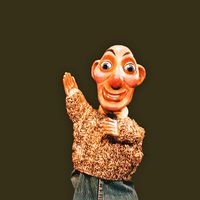 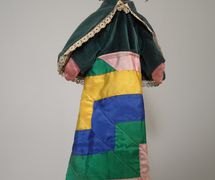 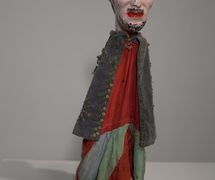 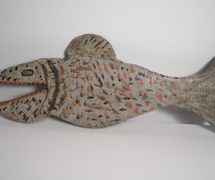 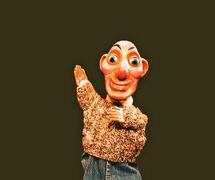 Character and name of Spanish artist, José Silvent Martínez (1890-1970) from Santa Marta de los Barros, Spain. This Galician puppeteer was born from a French father and Spanish mother. In 1919, he married his neighbour from Lérez near Pontevedra, where he spent the most productive years of his life. He was familiar with the world of theatre since childhood as his father led a travelling show. Silvent then studied puppetry in Portugal where he lived from 1905 to 1909, and was introduced to fantocheiros, as well as robertos. The former refers to the nation’s more traditional puppeteers while the latter are derived from the symbiosis created by the contributions of the Italian commedia dell’arte from the second half of the 17th century.

He assumed the stage name of Barriga Verde (Green Belly), and this also became the name of the principal character in his guiñol, glove puppet, performances. This simple, bold, mocking and occasionally vulgar character and his puppet were admired throughout Galicia. This figure can be considered one of the youngest representatives of a family of puppets that drew from the commedia dell’arte and emerged in Europe in the 17th century and included Pulcinella, Punch, Kasperl, Cristobita, and Dom Roberto.

José Silvent Martínez initially presented his shows in Galician, in the streets and in booths made of canvas, later of wood. Eventually these were equipped with electric light, loud speakers and signs with enticing titles – Teatro Melodías de España (Spanish Theatre Songs), Espectáculo culto y moral (Cultured and Moral Show), El auténtico Barriga Verde (The Authentic Barriga Verde) …Before these, dressed as a clown, and with great fanfare and banging of cymbals, Silvert would attract an audience with his florid speeches.

Humble and hardworking, Silvent was very adept at manipulation. He gave life to many characters, including Barriga Verde, Manuel, the Portuguese, or the Demon in episodes like O Barbeiro (The Barber), Xogo do pau (Game of Stick), O enterro (The Burial), and Touro polo Rabo (Bull by the Tail) that delighted young and old. During the summer, his puppet shows were accompanied by musical numbers, while during the winter, films and dances where presented. What attracted the public the most, however, was the agility and cheerfulness of the puppets and, above all, Barriga Verde himself.

Other Galician puppeteers imitated Barriga Verde’s style. However, this family business, which often drew on the talents of children and grandchildren, ceased all activity when Silvent Martínez left the theatre in 1964.