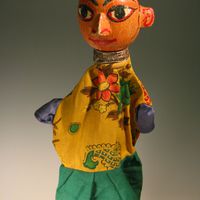 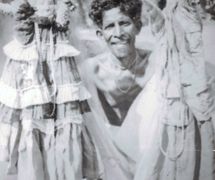 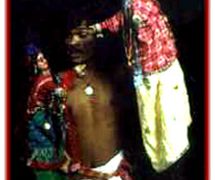 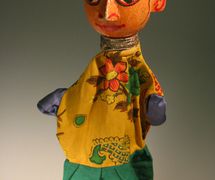 Traditional glove puppet theatre from West Bengal in north-east India. In the south of West Bengal, glove puppets carry the curious name of “merchants’ puppets” (benir or bener putul). The name also means “braiding of hair” and refers to the movement of the puppets, which twist and turn like hair being braided. The puppeteers belong to the low caste of palanquin porters, hand-rickshaw pullers and cycle-rickshaw drivers (those tricycle-taxis found in cities), or landless villagers.

The puppets measure 25 centimetres in height and have a head made of baked clay with wooden arms. The puppets are dressed in long, cotton skirts. The puppeteer wears one puppet on each hand and skillfully enacts dances and conversations between the puppets. The puppets have tinkling bracelets tied around their wrists, which keep time to the rhythm of their movements. The puppeteers sing popular Bengali and Hindi songs. Usually, the puppeteers roam in pairs, from one fair to another, and set up their show in the street without requiring any prior preparation. While one performer animates a puppet in each hand, the other plays a small drum, the dumroo.

The stories told by the male and female puppets are semi-improvised, drawing inspiration from the jatra, those popular Bengali legends reflecting the ironic spirit and earthiness of villagers and urban dwellers. The most popular benir putul characters are Krishna and Radha, who are used in Bhakti (devotional) songs, or Madan and Puti, a husband and wife pair who are constantly fighting amongst themselves.

The puppeteers, who begin their lives as showmen very early, go around the crowd, asking for a small contribution after every song.

Today, there are troupes and traditional families performing benir putul, some of whom are master puppeteers recognized in their communities and sometimes nationally for their contribution to the art of puppetry.