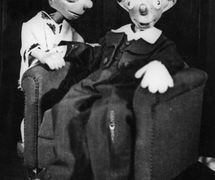 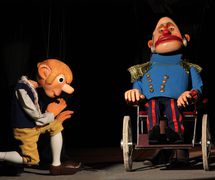 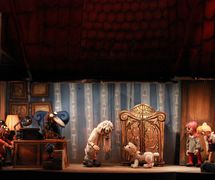 Traditional puppets from the region of Alentejo in southern Portugal, possibly from the village which gave them its name. The performance takes place on a small wooden stage (retábulo) whose entrance is held open by a double curtain of stretched vertical strings designed to hide the view of the rods holding up the marionettes and to protect them from the public’s possible reactions. The puppeteers stand on the sides, perched on the crates that serve to transport the puppets, and are hidden by a coloured cotton curtain (chita). The cardboard sets are painted and the lighting consists of olive oil candles. The rod marionettes are made of wood and cork, measure between 20 and 40 centimetres, and are manipulated from above, either individually or as a group, like those in southern Italy and northern Europe. They are accompanied by Portuguese guitar music.

The repertoire consists of traditional century-old works of an essentially religious genre, but also of street peddlers’ stories. The show always begins with the Baile dos anjinhos (Dance of the Little Angels) or the Contradança (Quadrille dance). The charismatic figures include the Padre Chanca (priest) and the Mestre-Salas (master of ceremonies), who according to tradition holds a club with which he either strikes or caresses the Padre during his sermon.

The oldest evidence dates from the end of the 18th century when, in Vila Viçosa, a real priest reacted to Padre Chanca’s sermon by condemning all the puppets to the pyre. The puppets, as we presently know them and which were made popular starting from 1967 by the musicologist Michel Giacometti (1929-1990) and the historian Henrique Delgado (1938-1971), can retrace their origin to the middle of the 19th century. The texts were created or reworked and orally transmitted during the Nepomuceno Dynasty. The puppets were also created or reworked over the years until they came into contact with Manuel Jaleca through his wife Antónia Maria Tapadas, “the Puppeteer” (1894-1981).

The troupe travelled the region of upper Alentejo in a cart pulled by a mule, and usually performed in a barn or cellar. Manuel Jaleca (1893-1976) took up the tradition in collaboration with António Talhinhas (1909-2001) who eventually repurchased all the equipment. After Jaleca’s death, the Évora Assembly district acquired his possessions and entrusted these to the Centro Cultural/Centro Dramático de Évora (CCE/CENDREV). In 1980, the centre and Talhinhas created a new family of professional actors. Research was carried on by Alexandro Passos (d.2007) who, in a first phase together with Manuel da Costa Dias, also compiled a repertoire. With the creation of the new “family” of Bonecos, the continuation of the tradition has been assured by the actors of the company: Ana Meira, Gil Salgueiro Nave, Isabel Bilou, José Russo and Victor Zambujo.