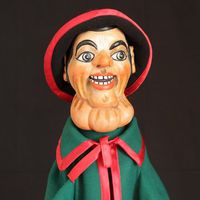 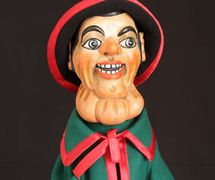 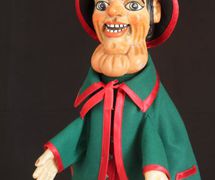 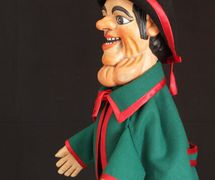 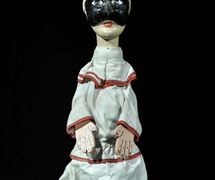 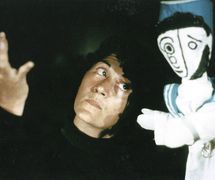 The Italian word for a glove puppet, which is animated by the insertion of the performer’s hand. The etymology of the term is uncertain: possibly “buratto” (cf. Latin burra, from French: bure), a coarse fabric with a loose weave used to sieve flour and which was used to make up the puppet’s costume, or perhaps from Burattino, a character from the improvised comedy. Researchers have focused their attention on this “mask” (maschera, stock character) to try and establish its historical context and its links with the puppet theatre.

The first appearance of Burattino as a commedia dell’arte character was on the stages of Florence: it was one of the “masks” (maschere) of the Compagnia dei Gelosi in 1577. This was the most famous commedia dell’arte company, treading the boards in Italy and France between the end of the 16th century and the beginning of the 17th, and received with particular enthusiasm at the court of Henri III of France.

Jacques Callot depicts him in 1622 in the Balli di Sfessania (dances from the village of Sfessania) under the name of Bagattino, a combination of bagattella and burattino.

In 1611, Burattino appeared in conjunction with other “masks” including Arlecchino in the fifty scenarios of Il teatro delle favole rappresentative (A Theatrical Repertory of Fables) by Flaminio Scala. Scala was an Italian actor and man of letters (second half of the 16th century and first half of the 17th) and a friend of the great actors Francesco and Isabella of the Gelosi company. In Il vecchio geloso (The Jealous Old Man) by Flaminio Scala, Burattino is a market gardener who tries to teach his daughter how to cultivate his garden. He was an actor of few words, but his movements were extremely lively and agile. It is difficult to establish which appeared first, the lively extravagant puppet, as Yorick (P.C. Ferrigni) holds, or the flesh and blood actor, according to the hypothesis of Maurice Sand and Charles Magnin. This question may be resolved by the description given by Tommaso Garzoni in his Piazza delle professioni del mondo (Plaza of the World’s Professions, 1585), which refers to Burattino calling attention and gesticulating to attract customers for dentists (cerretani, charlatans), or where he mentions Burattino presenting a comic number and “not being able to make any movement other than putting on his little bonnet”. The character did not seem to have any function beyond attracting attention, as a gesticulating puppet could do. It is this interpretation, if slightly extended, that we find with Domenico Ottonelli in Della christiana moderatione del theatro (Of Christian Moderation in the Theatre, Florence, 1652): “With this aim, some performers appear on trestle stages and give their show inside a sort of castle made of fabric. [These are] mountebanks with various puppets called burattini, that is to say human figures which they cause to execute some movements and produce some very effective words to divert the spectators and make them laugh.” The younger Joseph Heintz (Augsburg, 1600 – Venice, 1678) depicted a similar scene in a picture of Carnival, now in the Doria gallery in Rome.

It is certain that from this time on the use of the generic term burattino became more and more frequent, replacing the words bagatelli, magatelli, fraccurradi, used even by literary figures such as Ludovico Ariosto, Lorenzo Lippi and others, to designate little figures that could speak and act.