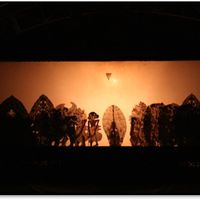 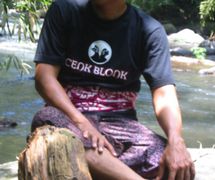 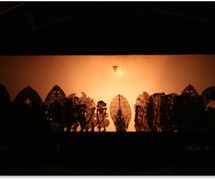 Indonesian puppet master (dalang) of Balinese wayang kulit (shadow theatre). Born I Wayan Nardayana, the top “box office” dalang of contemporary Bali pursued the arts from a young age despite his father’s plaints that economic success would be impossible in arts practice for someone coming from outside a traditional wayang lineage. As a child he played with wayang kertas (paper puppets), making the puppets and performing with friends in the village. He watched the performances of dalangs Pan Yusa, Ide Bagus Ngurah of Budak, and Jagra of Bongkasa, his early influences. Lacking funds to continue his education after high school, I Wayan Nardayana worked as a parking attendant. He played in the theatre (drama gong) group of I Gusti Ketut Putra and was recognized for his humour. Making his own leather puppets he began performing in 1993, calling his troupe Gita Loka. Business grew by word of mouth.

The biting and sometimes racy humour of his signature clown puppets, Nang Klenceng and Nang Ceblong, caused viewers to combine parts of these figures’ names, calling him “Dalang Cenk Blonk”. Since 1995, he has become universally known by that name. Cenk Blonk’s career has been marked by continuous innovations to attract younger audiences to this traditional art. He adopted a much wider screen, used coloured lights, and took musical cues from Java, introducing pesinden (female singers) and gerong (male singers). He multiplied instruments and musicians from the customary four metallophones (gender) to thirty. Spectacle, sound, and raucous humour drew young audiences of thousands. The video recordings of his productions are widely available in stores and currently YouTube clips have proliferated. His group plays up to 20 times a month and his compact two-hour performances contrast with the four or five hours of traditional presentations and allow him to play up to twice a day.

Still, Cenk Blonk is fully serious about the art and codes of the dalang: as popularity provided economic freedom, he pursued higher degrees earning the equivalent of a BA from ISI Denpasar (Institut Seni Indonesia, Indonesian Institute of the Arts, Denpasar Bali branch) and continuing toward an MA at Institut Hindu Dharma Negeri (IHDN, National Hindu University) in Denpasar, Bali, delving deeper into the philosophical, spiritual ideas of the Dharma Pawayangan (Book/Code of the Wayang), at the same time sharpening his political critiques. While a political independent, Cenk Blonk is quick to attack government corruption or social injustices. He sees wayang as both tuntunan (philosophy and teaching) and tontonan (entertainment), with the latter leading audiences toward the former.