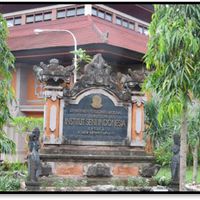 The Institute’s male and female graduates are the first generation of formally trained Balinese puppeteers (dalang). Early teachers were village artists like Dalang Sidja of Bona, I Wayan Nartha, I Wayan Wija, and I Wayan Loceng of Sukawati, and Ida Bagus Puja of Budak. By the l990s, graduates of the school itself taught, including Dr I Nyoman Sedana (b.1962), director of research; I Made Sidia, innovator in new technology and son of Dalang Sidja; and I Ketut Kodi, a popular mask (topeng) dancer. Graduation projects are major experiments in Balinese contemporary puppetry. Among the most famous graduates is I Wayan Nardayana, best known as Dalang Cenk Blonk (b.1966).