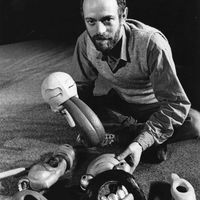 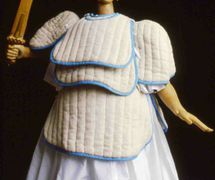 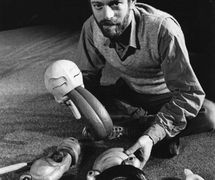 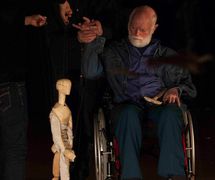 British puppeteer, craftsman, teacher, sculptor, director. Leith studied at the Wimbledon School of Art and Dartington College of Arts. He was apprenticed to John Wright, learning manipulation and wood carving at the Little Angel Theatre and was later a founder member of the Polka Theatre for Children.

In 1969, he was a co-founder of Barry Smith‘s Theatre of Puppets. In the following year, he made the puppets for the Royal Shakespeare Company’s production of Ben Jonson’s Bartholomew Fair and collaborated in Lotte Reiniger‘s first shadow puppet production. He carved a set of large, hieratic wooden figures in the style of the Indian tolu bommalata for his own production of the epic poem Beowulf, completed in 1971 with a grant from the Arts Council of Great Britain. It was presented in 1979 by

Christopher Leith has taken part in innumerable television and cinema productions and has received many prestigious commissions and engagements as puppet maker and performer. His own creations include Nikolai Gogol’s The Overcoat, Cuthbert and the Others, The Way to St Bernard.

From 1993 to 1999, Leith was the artistic director of the Little Angel Theatre in London, where he produced some twenty shows for adults and children, modernizing the style of the theatre, especially in the introduction of live voices and music. He extended the theatre’s touring network and instigated education “outreach” work by the company.

Christopher Leith remains active as a director. The Victoria and Albert Museum, London, has expressed the wish to acquire his sculptures in due course.