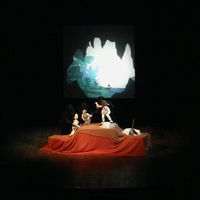 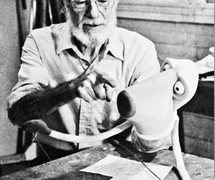 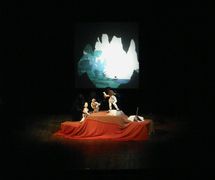 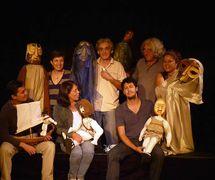 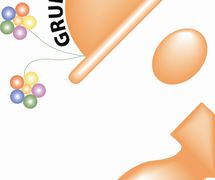 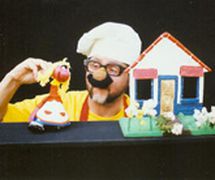 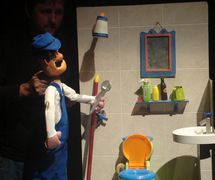 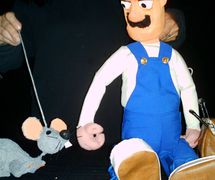 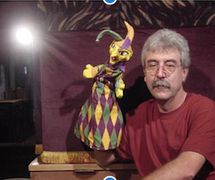 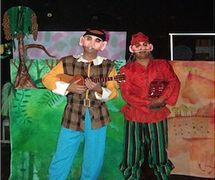 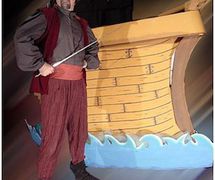 The Republic of Costa Rica (Spanish: Costa Rica or República de Costa Rica), a country in Central America, was sparsely inhabited by indigenous people before it came under Spanish rule in the 16th century. It remained a peripheral colony of Spain, declaring independence in 1821 and formally gaining its sovereignty in 1847. San José is the nation’s largest city and its capital (see Latin America).

The tradition of street theatre – mascaradas (masquerades) and parades of gigantes (see giant puppets) – and puppetry have been present in Costa Rica for a long time. There is evidence that in the 1940s, writer Carmen Lyra (born in San Jose, Costa Rica in 1888, died in Mexico City in 1949), an important figure in literature, politics and education reform in Costa Rica, as well as the famous writer Carlos Luis Sáenz (San José, Costa Rica, 1899-1983) occasionally used puppetry to tell their stories. The presence of puppetry through the early-mid decades of the 20th century is also evidenced, for example, by the contribution from the 1940s onward of the puppeteer, Guillermo Freer.

In the 1960s, in San José, the Moderno Teatro de Muñecos (MTM), Modern Theatre of Puppets) – created in 1968 by the Argentine Juan Enrique Acuña and a group of students – was the first company at the national level to closely link techniques and dramaturgy. Its contribution was essential to the professionalization and training of puppeteers. Theatrically, its fundamental purpose was to fully explore the metaphorical richness of puppets, relying in particular on a satirical approach and a poetic transposition of reality. Between 1968 and 1981, MTM presented ten innovative shows, five for children and five for adult audiences, which garnered the company the “Premio Ollantay” (Ollantay prize) in 1979, awarded by the Centro Latinoamericano de Creación e Investigación Teatral (CELCIT, Latin-American Centre for Theatrical Creation and Research).

Until 1987, the troupe was directed by the Argentine Juan Enrique Acuña, who also founded the puppetry chair (Cátedra de Títeres y Marionetas) in the Department of Dramatic Arts of the University of Costa Rica (Carrera de Arte Dramática de la Universidad de Costa Rica). This programme became a nursery of talent for a whole generation of actors, puppeteers, scenographers and dramaturges. Artists such as Rubén Pagura, Juan Fernando Cerdas, and Pato Catania emerged out of it. After Acuña’s death in 1988, Anselmo Navarro took over the direction of MTM, which henceforth played a vital coordinating role for the different practitioners of the profession.

Since the mid-1980s, the art of puppetry in Costa Rica has been considerably enriched by the arrival of new artists, both local and foreign. One might thus mention, among other troupes, the Teatro de Títeres de la Universidad de Costa Rica (Puppet Theatre Group of the University of Costa Rica), founded in 1979 in San José, and which functioned until 2009, the groups Antorcha, Alajuela and Tico-Títeres, the last directed by the Argentine mime and puppeteer Fernando Thiel.

Among the more recent groups are El Ojo Mágico (The Magic Eye), created and directed by Olga Luján and using primarily rod puppets (after her departure, the group had a very short life); since January 2010 Olga Luján has created another group, Pies en el aire Feet in the Air). The Disquis Tiquis company was founded by Alejandro Tossatti and Sandra Trejos, whose street theatre combined giant puppets (muñecones), stilts, dance and masks; it is currently run by Tossatti, and its projects, mostly of dance, are sporadic. Other companies contributing to this active movement include the Cucaramácara company directed by Anselmo Navarro, which continues to perform, and the Compañía Títeres Fiesta, directed by Enrique Barroso Freer, grandson of Guillermo Freer.

Groups that have demonstrated professionalism and permanence include Contraluz and Compañía La Bicicleta. Contraluz, founded in 1995 and still active, is directed by Gladys Alzate and José Fernando Alvarez (Colombian residents in Costa Rica since that time). Up to 2012, they have created eight puppet theatre productions for children, and four shows for adults, as well as theatrical advertising pieces. In 1999, José Fernando Alvarez received the Carmen Lyra Prize (prize in Literature for Children, awarded by the Editorial Costa Rica, a National Law Publishing House) for his play, Caminito del mar (Small Path to the Sea); this work is now required reading in schools. Compañía La Bicicleta (The Bicycle Company), founded in 2002, with its new shows for all ages mixes actors’ theatre, puppets, masks, storytelling and music.