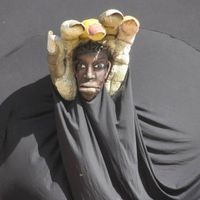 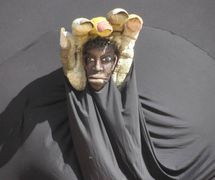 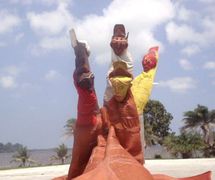 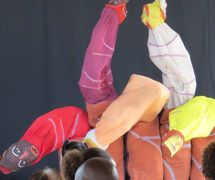 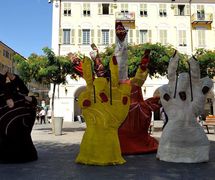 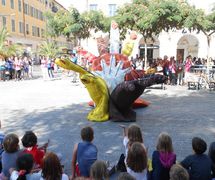 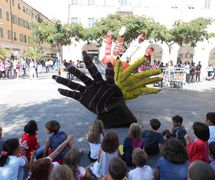 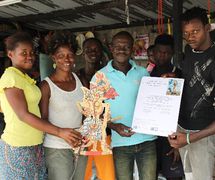 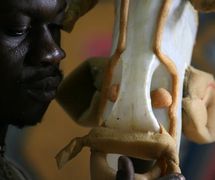 The Republic of Côte d’Ivoire (French: République de Côte d’Ivoire; in English known as Ivory Coast) is a country in West Africa. Prior to European colonization, the region was home to several states including Gyaaman, the Kong Empire, and Baoulé. It became a protectorate of France in 1843-1844, and a French colony in 1893; in 1960, the country achieved independence.

Several distinct types of puppets are known in Côte d’Ivoire. With the Senufo people, there are at least five categories, each geared to particular social groups and shown on various occasions. These effigies are the work of the kpembele (or kulebele) sculptors/blacksmiths that specialize in woodcarvings. The Baoulé (or Baule) and the Dan are also known for their sculpture and mask traditions that have links to puppetry.

Measuring 1 to 1.50 metres the deble (“spirit”) rhythm pounder statues represent male and female figures. Some are said to be a bust of the dead, former members of the poro (or gbo-oro) initiation society; others evoke mythical representation of the primordial couple called pombibele (“children of poro”). The look of these sculptures is very characteristic: the neck is long and sometimes dressed with a ruff made from a vegetable fibre, the arms form handles (to facilitate moving them). The base is large (used to rhythmically strike the ground when the statue “walks”), and traces of kaolin (a soft white clay) and ochre are sometimes visible on the finely carved wood.

Deble are used during tribal education for boys and considered effective protection against evil spirits. Kept in an enclosure reserved for ritual statuary, they leave their hiding place to accompany the youths as they leave the sacred initiation grove. They are also used during the funeral of a socially important figure, but on that occasion, they are accompanied by dueguele. Though the face of the latter figure is anthropomorphic, their body has rings, perhaps symbolizing a python – symbol of life and fertility – which was formerly kept, fed and venerated in the grove. The dueguele statuettes have a wooden helmet: the bell shape has an opening for the head, leaving the carrier’s face uncovered. These figures are animated at night, and older members and dignitaries of the initiation society are the ones that make them dance.

During a funereal performance, the deble are used, beating the ground with their heavy base: their movements are slow and rhythmic. Accompanying drums, rattles, wooden trumpets and song musically reinforces the earth pounding sound of the deble. On a symbolic level, these “puppet-drumsticks” clear and pack down the last earthly route of the dead, which carries the deceased towards the afterlife.

The Senufo also use a wooden horse figure during the various ceremonies: going to war, hunting or even at the end of a funeral. Rather than a skirted hobby horse figure (also found in other places in Africa) the Senufo animal is made entirely of wood. The rider-choreographer-puppeteer gambles about on this puppet mount.

There are simple puppets among the children’s toys, but found in rituals where they can have a very elaborate aspect. Atiqui-din is a female wooden puppet, finely cut, that is carried at the tip of a stake in the region of Bondoukou. During the agricultural rituals she appears dressed in vegetable fibre robes. During funeral ceremonies, she wears a black or indigo cloth turban.

One of the Senufo divinatory methods is to use wooden statuettes that represent anthropomorphic or zoomorphic ancestors, some with feet that point backwards – a sign that allows the Senufo to distinguish a bush spirit from a human. The figurines have the power to communicate with the beyond through the soothsayer, usually female. Skillful animation and ventriloquism can sometimes make this an elaborate spectacle.

It is also important to mention the gle (also known in Liberia as ge and in Sierra Leone). The head is anthropomorphic with a crown of feathers. Modelled in clay, several magic substances are added to the figure. It protects honest folk from the sorcerers. In order to be effective, it has to be activated by a clairvoyant who puts the image on the head before going into trance. The gle then reacts to the presence of the witch who can then be punished.

As late as the 1950s, healing puppets were still very numerous. Among the Bete-Shien there was a well-known magic statuette with the name of Yougono in the village of Bappa (situated in the triangle of Oume, Gognoa and Sifra). This statuette of a standing woman was about 40 centimetres tall. At her feet her begging bowl awaited offerings. Yougono was multi-lingual: during consultations in the hut of her fetish-presenter (presumably her ventriloquist) she would pronounce divinations in the various languages, Bete, Baule, Agni, Dioula and French. Questioned directly by a person, she answered in the same language, without the need for an interpreter. Her celebrity extended to Abidjan, where the image keeper would bring her for consultations on request.

The kafigueledio, also called “the one who says the truth”, is a wooden effigy belonging to the sorcerer. It measures between 40 and 90 centimetres, and looks like an anthropomorphic but faceless figure, with a large tuft of feathers and porcupine quills, tightly wrapped in a raw canvas (often mottled) and covered with a thick crust of clay mixed with sacrificial blood and dried. Its arms are disproportionately long, articulated at the shoulders, and extended with sticks (sometimes in the shape of a club) or branches. The sorcerer points these in the direction of the person targeted (holding them from the back), and in this way he casts his spell.

The kagba is a moving composite construct with an animal head, and can be considered a cross between the puppet booth, body puppet, and a mask. It is made with a horned zoomorphous mask of the poniugo (funeral figure) type, attached at the front of a frame usually covered with cloth with a geometric design (often checkered). Connected to the symbolism of the poro initiations, this “puppet booth-mask-puppet” is shown during certain funerals. It goes toward and circles the corpse, and stares at it intensely. The effects of this scene are remarkable: on the one hand, there is the inertia of the white wrapped body on the ground, and, on the other, the dancing presence of the kagba, colourful and full of life.

Sometimes a puppet is “improvised” with a facemask that is manipulated while off the face. With the Abron, this practice is used to entertain children before a dance session. First, the object is animated by an old man who moves it in front of his face, dances and “acts like a clown” to the great enjoyment of the young. After a while, the dancer gives the mask to the boys who try to imitate him. Then the mask is put away, and the real dance begins.

The importance of dancing objects is highlighted by the Côte d’Ivoire choreographer, Alphonse Tiérou who discusses in his writings the ritual objects, scarves, body cloths, leafy branches, and many diverse accessories. These influences contribute to the success of his ballets – sharing ideas that range from the simple cloth to the sacred statues activated in movement.

During various festivities, it is possible to see puppets that are attached onto portable stages and controlled by one or more strings running inside the figurine and can be pulled from behind the stage where the strings emerge. The characters shown are diverse, from farmers to boxing champions. All of these puppets are made of polychrome wood and have moving parts (arms, knees, jaws, etc.).

Made and activated by boys, these playful puppets are usually ephemeral, but could present short plays. Figures are humans, animals and monsters. With the Baule, the young puppeteers have a couple made of dried palm leaves and activated with the toes, making the dancers twist (see Toe/Foot Puppet). These little puppets have their hands fixed to their waists, but can dance because of their flexible legs.

Also among the Baule, there are birds made of painted wood that peck and sometimes even sing, which are pulled by a string. They have also invented the monster Akoto (“sidekick fetish”): a head dances on top of a pole to scare children. This bogeyman with its white face is made of a monkey skull with feathers, and black and white cotton. It is shown to small children to scare them into good behaviour. It is accompanied by the repeated chant: “Akoto, dance and show me!”

In Côte d’Ivoire, the care and the magic powers attributed to the fertility doll give it a role that is very similar to a puppet. Among the Dan, this is called GboN ne (raffia child). Made of palm stuff, with designs rubbed on from burnt palm oil, it is decorated with six copper earrings (three on each side). This type of doll is given to circumcised girls in order to prepare them for motherhood.

As in many other countries, twins have a particular status. Considered as a gift from the gods to virtuous households, a pair of twins is feared for their magical powers and refused nothing. But their position is ambivalent and not always valued, because they force on the mother twice the expense and the need to make a series of special offerings. When a twin dies, a statuette is sculpted to replace the dead sibling. Then the statuette is treated as if it were human, creating a cult of twins where the animated double has a prominent place.

The interrogation of the corpse, to expose the witch responsible for the death, is mentioned today as a news item in the daily press. Once widespread, this procedure consisted of carrying the dead body so that it could personally lead to the person responsible for the death. According to the participants (carrier-animators) of this ceremony, their movements followed irresistible impulses coming from the corpse. (See also Burkina Faso.)

Puppets of the After-life

The Baoulé (or Baule, one of the largest groups in Côte d’Ivoire) have funny wooden characters of 40-50 centimetres represent living beings in the spirit world (blolo). They are called blolo bla when they represent women, and blolo bian for men. Whether old style (with traditional clothing and a shiny patina) or modern (fully painted), these figurines represent powerful personages or spirit spouses and can be white or black (a colonist, a high military officer, a business man, a beautiful woman … ). In Abidjan, they are called “les en-haut de en-haut” (the tip top). Each Baule has his/her own spiritual blolo, dream wife or husband (sculpted by an artist-seer) whose existence he/she learned about in youth, often revealed by a soothsayer. These earthly forms of their heavenly spouse are permanently kept in the house of the owner. For some, these statues represent rivals of the living spouse: if the real husband is old, his wife’s blolo will be young and handsome, if the woman is sterile, her husband’s blolo will be a fertile woman, etc. These figurines are placed in contexts as well, slipped in their own bed, for example.

Today, the puppet theatre in Côte d’Ivoire often denounces corruption and works towards making people aware of social issues. In 1985, the Ki-Yi Mbock theatre, a professional artist cooperative, was created under the direction of Abidjan’s female author/artist Werewere-Liking (b.1950).

Compagnie N’soleh (“working together with the same goal”), a dance and theatre company, was created in 1994 in Abidjan. In 1996, Atou Écaré, a female artist from Ki-Yi Mbock and a performer of N’soleh, chose puppetry (giant puppets and string puppets) to reach children and that were played in the schools. She takes part in many events, and was invited to the Festival International des Francophonies (International Festival of the Francophone communities) in Limousin, France. Disturbed by the increasing number of street children fending for themselves, Atou Écaré defines her artist orientation by paying tribute to these children who haunt the sidewalks. Such social sensitivity and awareness is widely shared with other puppeteers in Côte d’Ivoire.