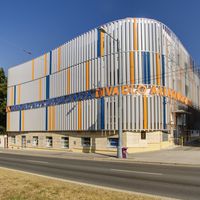 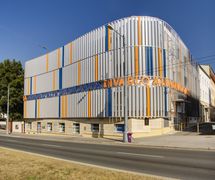 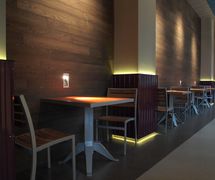 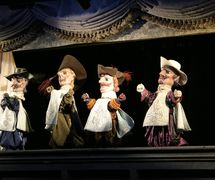 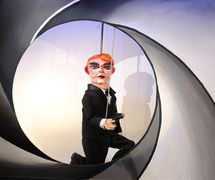 Czech puppet theatre founded in 1963 in Plzeň (Pilsen). The Alfa Theatre took the name “Alfa” at the time of the merging of the Kabaret Alfa (Alfa Cabaret Ensemble) from Plzeň (Pilsen) and the Západočeské loutkové divadlo (Western Bohemian Puppet Theatre) from Karlovy Vary (founded in 1951). Originally the theatre was geared towards children, young people, and adults. The repertoire included several genres: puppet theatre performances, pantomime and musical revues. In 1966, the ensemble was reorganized and the actors, mimes and pop music singers left. Under the leadership of director Ladislav Dvořák (manager 1966-1970), the theatre focused on puppet work for children. Lyrical performances of modern fairy tales dominated the repertoire.

A significant change of style occurred after 1968 when set designer Petr Matásek and guest director Josef Krofta dramatically utilized the theatre’s exceptionally large stage, which had been a handicap up to that time. They created a functional symbiosis between puppets and live actors in a number of productions, such as Jiří Středa’s Sluha a tři mušketýři (Servant and Three Musketeers, 1973), a performance that demonstrated this relationship with an emphasis on parody and the grotesque. This trend continued throughout the 1970s, especially in the works of the director Jiří Středa, who sought inspiration in world epic literature (Jan Amos Komenský, Alexandre Dumas, Aleksandr Pushkin, B. Traven), and director Karel Brožek and Petr Matásek, who made the Alfa Theatre the most innovative Czechoslovakian stage of its day.

By the end of the 1970s and throughout the 1980s, the theatre’s profile was determined by the visual artist Alois Tománek (manager from 1976 to 1985), who from 1982 introduced a new style with the collaboration of director Karel Makonj and the dramatist Pavel Vašíček. Vladimír Čada and Blanka Josephová-Luňáková became the representatives of outstanding creative drama of their time. In 1990, the theatre was managed by Miroslav Pokorný and artistic director Tomáš Dvořák. The current director of Alfa Theatre is Tomáš Froyda; its artistic director is still Tomáš Dvořák whose staging is inspired by the naïve style of folk puppetry. In 1992, the theatre’s name was changed to Divadlo Alfa (Alfa Theatre) when it moved to its new building.

Among the theatre’s hallmark performances are Komenský’s Labyrint světa (Labyrinth of the World, 1970), Jan Žižka u hradu Rábí (Jan Žižka Besieges the Rábí Castle, 1974) by Jan Nepomuk Lašťovka, Ladislav Dvorský’s Poklad baby Mračenice (Treasure of the Old Hag Sour Puss, 1983), Ludvik Aškenazy’s Milenci z bedny (Lovers From a Box, 1991), and Tři mušketýři (The Three Musketeers, 2006), a performance based on the bestseller of Alexander Dumas Sr that has succeeded both at home and abroad. With dramatist Pavel Vašíček and scenographer Ivan Nesveda, the company created productions for adults that were sophisticated parodies of current social problems. Besides these productions, such as the comedies of Johann Nestroy, Náčelník Večerní vánek (Chief Evening Wind, 2001), the Alfa Theatre has attracted especial attention with Jeminkote, Psohlavci! (Goodness Gracious, It’s the Dogheads!, 1999) written by Iva Peřinová, an historical play based on the south-western Bohemian Czech frontier guards and their unbending bravery.

Since 1967, Alfa Theatre has made its contribution to the development of Czech puppetry by organizing the puppet festival Skupova Plzeň (Skupa’s Pilsen Biennale).