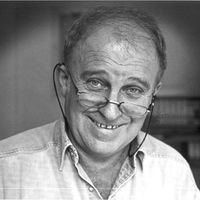 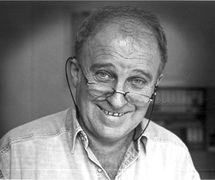 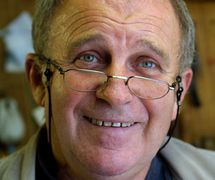 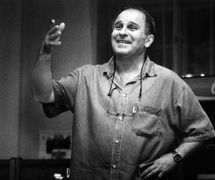 Czech puppeteer, director, writer and pedagogue. After completing his studies in the puppetry (loutkarstvi) department of the Academy of Performing Arts in Prague (DAMU – Divadelní fakulta Akademie múzických umění) where he specialized in directing and dramaturgy, Josef Krofta joined the Státní bábkové divadlo (State Puppet Theatre) in Bratislava, where he worked from 1965 to 1968. He moved to the Malé divadlo (Small Theatre) in České Budějovice (from 1968 to 1971) where he was recognized as a gifted director. However, the striking directorial signature and creative personality of Josef Krofta developed at Divadlo DRAK (DRAK Theatre), in Hradec Králové, where he has been artistic director since 1971. Josef Krofta’s first production at DRAK was Princezna s ozvěnou (The Princess with an Echo). Thereafter, with his colleagues (the stage designer Petr Matásek, the actor and musician Jiří Vyšohlíd, and the dramaturge Miloslav Klíma), they set their own style that established the reputation of DRAK in Czechoslovakia and internationally.

Josef Krofta insisted on the profound nature of the art of puppetry. He had never adhered to the illusionist style of theatre; rather, he explored all the possibilities of puppets in their direct relationship with live actors. In Krofta’s productions the manipulation of the puppets is usually visible; the subjects, objects, figures and costumes, and his sense of space add a remarkable sense of musicality and mobility to the whole performance. His extraordinary visual imagination gives an unexpected dramatic and symbolic dimension to his productions. His directorial work has a wide range of topics and styles – from folk comedy to interpretations of classical drama. Among his most striking and most successful performances at DRAK are the following: Jak se Petruška ženil (How Petrushka Got Married, 1973); Enšpígl (Eulenspiegel, 1974); Popelka (Cinderella, 1975); Šípková Růženka (Sleeping Beauty, 1976) to Pyotr Ilyich Tchaikovsky’s music; Unikum – dnes naposled! (Unikum – Today for the Last Time!, 1978); Zlatovláska (Goldilocks, 1981); William Shakespeare’s Sen noci svatojánské (A Midsummer Night’s Dream, 1984); an adaptation of the Bedřich Smetana opera Prodaná nevěsta (The Bartered Bride, 1986); and Kalevala (1987). The best work of the 1980s is Krofta’s staging of Píseň života (Life Song, 1985) inspired by the play Drak (Dragon) written by Jevgenij Švarc, a denunciation of totalitarianism. Among recent works of the DRAK ensemble especially appreciated by both audiences and critics alike is the fairy tale Tři zlaté vlasy děda Vševěda (Three Golden Hairs of Old Know-it-all, 1998) and the staging of the fairy tale “Snow White” called Jak si hrají tatínkové (How Daddies Play, 2005).

In addition to his work in the puppet theatre, Josef Krofta was also guest stage director in several national theatres particularly for Candide in Hradec Králové, and abroad, in Poland, Finland, Denmark, Switzerland and Australia. He also created several international projects: Jánošík (1975), a Czech-Slovak-Polish co-production; after a long interruption, Královna Dagmar (Queen Dagmar, 1988), a Czech-Danish co-production; before his most renowned project, the staging of Babylónská věž (The Tower of Babel, 1993), a Czech-French co-production. His latest international creation, in cooperation with a Japanese partner, is the adaptation of Shakespeare’s Romeo and Juliet entitled Mor na ty vaše rody! (A Plague on Both Your Houses!), produced in 2001. Krofta’s most recent work, which has received numerous awards from the Czech Republic and foreign countries, include Medardo a Pamela (Medardo and Pamela, 2004) and Zlatovláska (Goldilocks, 2008).

Josef Krofta had continued to be active as a pedagogue abroad: notable were his cooperative activities with the Institut International de la Marionnette in Charleville-Mézières, France, and with the puppetry school in Frederikstat in Norway. He had led international workshops and lectures popularizing the puppet theatre in Australia and the United States.

From 1992 to 1996, Krofta was a member of the UNIMA Executive Committee. In 1990, he became the head of the Katedra alternativního a loutkového divadla (Department of Alternative and Puppet Theatre) at the Academy of Performing Arts (DAMU) in Prague, which he has transformed during his tenure.

Josef Krofta modernized Western puppet theatre by moving it away from influences of the traditional marionette theatre. His vision of the modern puppet theatre brought it closer to the current world theatre movement. Josef Krofta’s work has inspired theatre not only in the Czech Republic but also on the international stage.