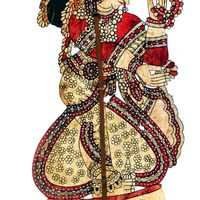 Character from the Mahabharata, a central figure in Indian theatre. Draupadi, also known as Panchali, princess of the forest kingdom, Panchala, becomes the common spouse of the five Pandava brothers. She represents certain communities in India that practise polyandry. Occupying a key position in the web of intrigue in the Indian epic, Draupadi becomes the final wager in a game of loaded dice. She resists a collective violation of her honour and pride by the Kauravas by invoking Krishna (avatar of god Vishnu) and putting herself under his protection after extracting this promise from him: Dushasana, the Kaurava brother who dared to put his hands on her person, would perish by having his innards and intestines ripped out by one of her husbands; and that she would wash her long tresses in his blood. Krishna grants Draupadi her two wishes, and her assailants cannot undress her, as her sari continues to be unravelled with no end in sight. In certain states of India, people consider her a goddess and are devotees of her cult.

Shadow theatres represent Draupadi as a tall and beautiful figure of primary importance with her face always in profile, equal to a goddess as attested by her height and the care taken in the colouring of her figure and the complexity of the carved perforations creating her ornaments. In the tolu bommalata shadow theatre of Andhra Pradesh she is shown with movable joints at the neck, shoulders, elbows, wrists and often also at the waist, because she dances despite the tragic turns that her life takes. Her long braid also has two or three articulations.

The shadow theatre performers, who put up shows from the two epics and who use a limited number of shadow figures, sometimes use the same figure for Draupadi as for Sita, the comely consort of Rama in the Ramayana, the “princess whose skin shines like fine gold”. In this case, the figure seated under a thickly foliated tree can move only her arm and her hand, thanks to movable joints at the shoulder and at the wrist, as is the case with the tolu bommalata performance.