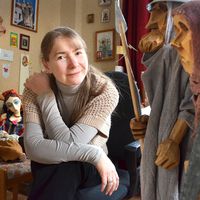 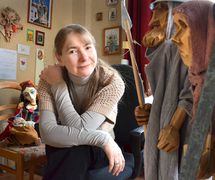 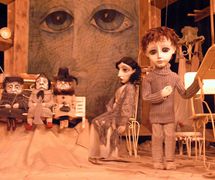 Russian stage and puppet designer. Having graduated in 1970 from the Rostov-on-Don School of Arts, Elena Lutsenko became a stage designer at the Rostovsky teatr kukol (Rostov-on-Don Puppet Theatre). From 1976 to 1981, she took the course of puppet design at the Puppetry Department of the Leningradsky gosudarstvenny institut teatra, muzyki i kinematographii (Leningrad Institute of Theatre, Music and Cinema), now Saint Petersburg Theatre Arts Academy. Her early experiments aroused the interest of Valery Volkhovsky, who offered her the job of principal stage designer at his theatre in Chelyabinsk in the Urals. She remained with the theatre from 1981 to 1987, designing Volkhovsky’s best productions.

The Chelyabinsk period provided Elena Lutsenko an especially fruitful opportunity for further experimentation and research. The “Ural Zone” (see Russia) was at the time an association of talented directors, disciples of Mikhail Korolev, that provided ongoing exchanges of creative ideas and organized festivals.

In 1987, Volkhovsky and the core of the company moved to Voronezh where they were involved in a project that profoundly reformed the local puppet theatre, turning it into one of the country’s leading puppet companies during the 1990s. Successful productions of the period include Ozyorny malchik (The Lake Boy, 1988) after Pavel Vezhinov, which won prizes at many international festivals, and Gogol’s Shinel (The Overcoat, 2001).

The highly complex dramatic structure and equally sophisticated directing by Valery Volkhovsky required that Lutsenko become virtually a co-creator of the artistic image of the production. Her approach was distinguished by her ability to use the stage space to the fullest, where she creatively brought together a variety of types of puppets, masks, actors, and textures of materials, all with meticulous precision.

Elena Lutsenko is the winner of numerous prizes and awards, including the 1999 Russian State Prize for Literature and the Arts.