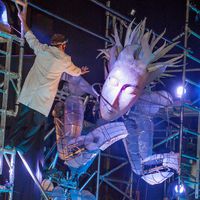 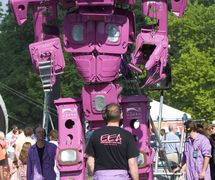 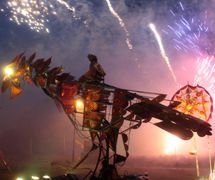 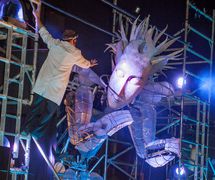 British company founded in London in 1982 by Debbie Mullins, Les Sharp and Bob Harris. At first influenced by companies such as Welfare State International, Emergency Exit Arts specializes in the creation of large-scale participatory shows including pyrotechnics. Their spectacular outdoor events with giant processional figures draw on local and international cultural traditions, including the mythology of rural festivals. It aims to “bring inspiration and enjoyment to audiences and participants alike”. At the heart of the productions is a strong belief in collaboration and multiculturalism in the arts.

Their work had a politically oppositional element during the years of the Thatcher government in Britain (1979-1991) and their performances often featured giant caricatures of figures in authority, notably Margaret Thatcher. The figures were often burned following the procession. During the 1990s, the company developed site-specific performances and rituals and extended their use of fire and pyrotechnics following a collaboration with the Catalan company Els Comediants. More recently, they have developed a wide range of work, drawing on multicultural and intercultural arts in London, including a Bollywood Brass Band, a Caribbean Masquerade and Asian Club Music.