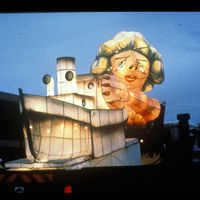 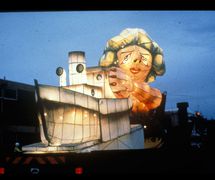 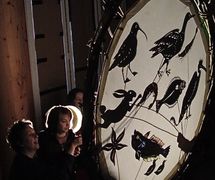 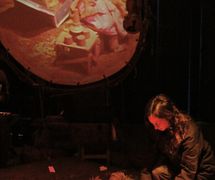 British theatre company dedicated to celebration, ritual and community participation, founded in 1968 by John Fox, then lecturer at Bradford College of Art, and Sue Gill. After a number of moves the company settled in Ulverston in Cumbria, (north-west England), in 1979.

Welfare State International (WFI) is best known for its work from the 1970s to the 1990s, when they were creating large-scale outdoor performances which included sculptural icons and giant puppets, popular song, ritual, processional and shadow imagery and fire. WFI’s work bridged the visual and the dramatic, and included sculptors, poets, puppeteers, musicians, storytellers and craftspeople among its many artists. The company would engage with a specific community, in the UK and abroad, for which it engendered a sense of identity and commonality. They worked in environments far from traditional theatre buildings.

Early shows of note included The Travels of Lancelot Quail (1972); Parliament in Flames (1976); Tempest on Snake Island (1981) in Toronto; and The Raising of the Titanic (1983) in the London docks. After the mid-80s, the company focused more on their local community in Cumbria, and between 1987 and 1990 there was an ongoing programme of events, workshops and performances known as A Tapestry of Celebration. From the 1990s, the company undertook the creation of their award-winning building, Lanternhouse, which served as the company’s home for numerous projects, including smaller-scale works relating to rites of passage, such as marriages, funerals and blessings. The Ulverston Lantern Procession became an annual tradition.

The company has passed on their expertise for others to learn about their techniques in a number of publications, notably Engineers of the Imagination, the Welfare State Handbook (1983) and John Fox’s autobiography, Eyes on Stalks (2002). For a number of years the company led the MA in Cultural Performance at Bristol University.

In 2005, John Fox retired from the company and Welfare State International ceased to exist; the succeeding group of artists continued the activities of the company but with a new name, Lanternhouse, but in 2012 they were forced to close down when the Arts Council withdrew its financial support.

John Fox and his wife Sue Gill went on to found another company, Dead Good Guides, which engages in the arrangement of alternative ceremonies for funerals and publishes a number of booklets on the subject.