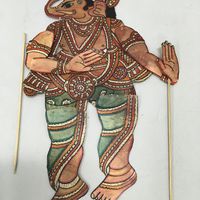 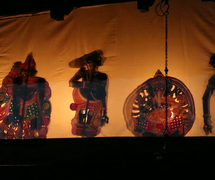 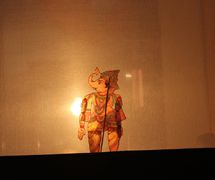 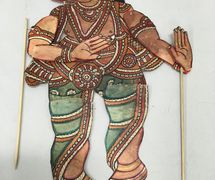 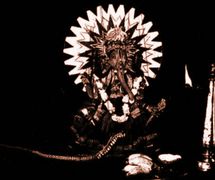 God of the Hindu pantheon, also known as Ganesha or Ganapathi, invoked at the start of almost all performing arts in India. The son of Shiva and Parvati, Ganesh was an unwitting victim of a misunderstanding between his parents. From this altercation, he loses his head, which then rolled into a river. Shiva promises Parvati that he will replace the head of their son with another head, that of the first creature that he will see. A pachyderm soon appears, and that is how Ganesh became the elephant-headed god who clears all obstacles on the path to success.

Featuring in the yakshagana gombeyata, tolu bommalata, and togalu gombeyata, Ganesh advances on stage with his potbelly and debonair manner, sitting astride a rat, his preferred mount suggesting speed. His benevolent gestures remain those of a human being. Lateral movements of his head, the quick crossing of his legs, hands caressing his abdomen, all serve to make him a comic and beloved character, much appreciated by Indian spectators.