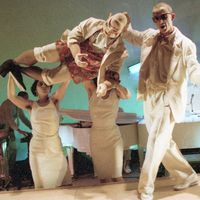 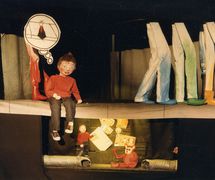 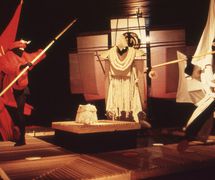 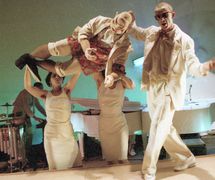 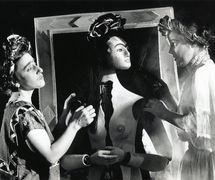 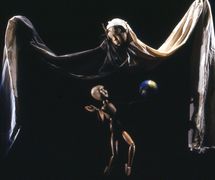 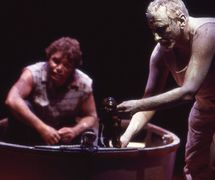 Australian puppet company founded as a partnership in 1977 in Melbourne by six young puppeteers, among them Peter J. Wilson. They had previously been working with the Parry-Marshall Puppet Theatre which used glove puppets and string puppets and now aimed to move away from traditional forms into innovative “visual theatre”. (The Parry-Marshall Theatre was founded in Adelaide in 1962 by “Parry” Parry-Marshall (c.1908-1980), and his wife Anne, both from England, and was later transferred to Melbourne in 1968.)

An important early influence was Nigel Triffitt’s production of Momma’s Little Horror Show (1976, see L. Peter Wilson) for the Tasmanian Puppet Theatre. In 1982, Triffitt (1949-2012) created Secrets for Handspan. This was the first of many theatre shows for adults and it toured to Europe and the United States.

Handspan was best known for its inventive shows for adult audiences but its works included numerous children’s shows, theatre-in-education for adolescents and even solo works such as the four disparate pieces that made up Handspan Women Alone.

Handspan became a collective of about thirty members with a full-time manager and artistic director. Members only received payment when they were involved in projects.  For some years policy was determined by members but in the mid-1980s the position of Artistic Director was created. Three of the founding members, Ken Evans (who designed many of the productions), Peter J. Wilson and Andrew Hansen maintained a strong association with the company, the first two serving brief spells as Artistic Director.

Eventually this once-vigorous company, which had served as a focus for young puppeteers, lost motivation. It gradually lost its funding and ceased in 2002. From 2003-2008 money remaining sponsored the Handspan Visual Theatre and International Study and Travel Grant.