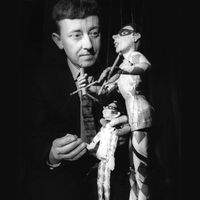 British puppet theatre founded in 1958 in Colwyn Bay (North Wales) by Eric Bramall (c.1920-1996). Harlequin Puppet Theatre was Great Britain’s first permanent puppet theatre. It opened on July 7, 1958 and remains the only purpose-built puppet theatre in Britain. The building won a gold medal for its architect and gained a Civic Trust Award.

The Eric Bramall Marionettes was established in 1947 and over the subsequent years appeared on the major British variety and music hall theatre circuits as well as touring extensively for music and art societies around the country. Eric Bramall pioneered the technique of marionette (string puppet) cabaret and was acclaimed for his manipulation. It was always Bramall’s dream to find a permanent home for the marionettes. When it opened, the Harlequin Puppet Theatre maintained a policy of matinees for children and evening productions for adults. As well as the traditional repertoire of pantomime and fairy tales, Harlequin presented comic operas, Shakespeare, musical pieces and a number of specially commissioned plays.

In 1963, Eric Bramall established Colwyn Bay on the global puppet map with Britain’s first International Puppet Festival. This success was repeated in 1968 when the theatre also hosted the UNIMA Praesidium (later renamed UNIMA Executive Committee) concurrently with the festival.

Over the years many British puppeteers have been tutored in marionette manipulation by Eric Bramall and Chris Somerville (authors of Expert Puppet Technique, London, Faber and Faber, 1963). Somerville was Bramall’s partner from the earliest days of the theatre, and since Eric Bramall’s death the theatre has continued under his direction.