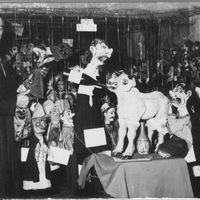 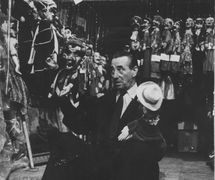 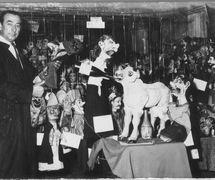 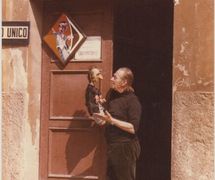 Company of Italian puppeteers. The Ferrari family troupe of glove puppet performers is one of the oldest in Europe. The family came to prominence in the winter of 1892, when Italo Ferrari, a shoemaker by trade, supported and encouraged by master marionettists Arturo and Francesco Campogalliani, staged his first production at Roncopascolo in the Province of Parma. Another puppeteer, Galli, had lent him a puppet stage and puppets. Italo Ferrari performed La foresta perigliosa (The Dangerous Forest), a play from the Campogalliani repertoire. The adventures of the Ferrari family, which continue well over a century later, were launched.

Italo toured for a long time with the Campogalliani company across towns and villages in Emilia, then he directed his efforts for some time toward the actors’ theatre in Turin.

He returned to Parma and became a puppeteer once more. His wife, Ebe Avanzini, lent her voice to the female characters. Italo Ferrari modified the whole of the traditional glove puppet repertoire, making a rather difficult transition from tragedy, which was in fashion at the time, to comedy. In the period following World War II, in the throes of economic crisis, the company hardly performed more than once per week. To increase its revenues it started a band, which was an undoubted success.

Around 1948, the Ferrari company began once more to devote itself exclusively to puppets. It played regularly at the Salsomaggiore Baths. Its plays were aired on the radio and, in 1953, it participated in the first experimental broadcasts of Italian television. Italo died on stage in Parma, in March 1961, during a performance of I due anelli magici (The Two Magic Rings).

Upon Italo’s death, his son Giordano (1905-1987) took over as director of the troupe. At this time it consisted of Giordano Ferrari, his wife Bianca Anesi, a lyric soprano who lent her voice to the female puppets, and their two sons: Italo junior, called Gimmi, who at the same time experienced swift success with a rock band, and Luciano, administrator, impresario, soul and driving force of the company, completely indispensible to Giordano who, in the meantime, had lost his voice as a result of vocal cord surgery. Luciano died, however, in 1978 at age forty-four. Gimmi abandoned music and took over as head of the company, which he has run since 2005 with his wife Manuela, his son Giordano junior, and Luciano’s daughter Daniela.

The Ferrari family considerably expanded the central Italian glove puppet tradition, and introduced there an important musical component, often original; they have also absorbed modern stagecraft techniques to their advantage. They created their own maschera (“mask”, stock character): Bargnocla, a sympathetic man of the people, with a forehead marked by a lump signifying every possible unhappiness. Today, the Ferrari repertoire consists of traditional pieces such as I tre bravi alla prova (The Three Strong Men Put to the Test), based on work by Ruzzante (1502-1542), or Fata Morgana (Morgan le Fay), and surprising creations, such as for example their spectacular version of Puss in Boots, which they have performed in locations as widespread as Latin America and Thailand.

Finally, the Ferrari company is the repository of one of the largest and most beautiful collections of puppets in Italy; a number of the family companies that, one after another, closed shop after World War I, left their treasures to Giordano Ferrari. This collection is visible in Parma, at the Museo Ferrari located in a 16th-century palace.