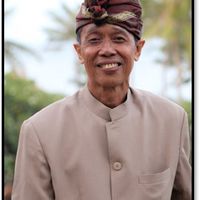 I Wayan Wija[Also know as Ceng Blong (I Wayan Nardayana)]

Indonesian performer and puppet master (dalang) of Balinese wayang parwa shadow puppetry. I Wayang Wija was born in Sukawati (Gianyar, Bali), the village with the most puppeteers (dalang) per capita in Bali. Wija is the son of puppet master I Wayan Gombloh, with whom he studied from age eleven. At thirteen he gave his first performance.

Though a traditionally trained artist, Wija is also one of the most innovative performers. He created in l982 wayang tantri, a form of shadow puppet play that tells animal fables inset in a Sheherazade-like framework: Lady Tantri preserves her life by telling her stories to a misogynistic king. Wija popularized this little known story after a l980 presentation of it at the Bali arts academy and created new puppets with multiple joints allowing subtle, realistic movement. (Tigers scratch their haunches and deer leap with grace). In l997, the island-wide Bali Arts Festival featured a competition of Tantri wayang.

Wija’s collaborative work with western artists includes experiments with Lee Breuer of Mabou Mimes (see United States of America) and Larry Reed of Shadowlight Theatre in San Francisco (with whom he created Wayang Listrik/Electric Shadows in l998, and other work using a large screen, projections, and a mixture of shadow dancers wearing mask-headdresses and puppets). With composer Evan Ziporyn of Boston, Wija created Shadow Bang (2001 and 2004). In 2011, he was artist in residence at the Asian Art Museum of San Francisco. I Wayan Wija collaborated with Australian composer Paul Grabowsky and director Nigel Jamieson on the concept for the production, The Theft of Sita (1998-2000), based on the Ramayana. These international puppet experiments have involved Wija’s students at ISI Denpasar (Institut Seni Indonesia, Indonesian Institute of the Arts, Denpasar Bali branch) where he sometimes teaches and insure his legacy of innovation is inherited by the coming generation of Balinese puppeteers.

Most of I Wayan Wija’s performances are solo wayang for traditional ceremonies, but this openness to extension of the Balinese tradition is an important hallmark of his work.