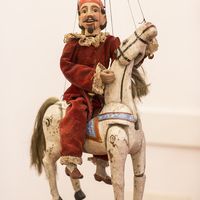 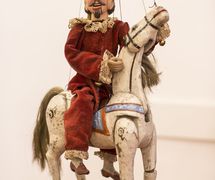 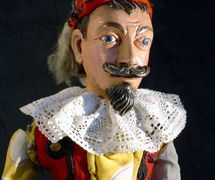 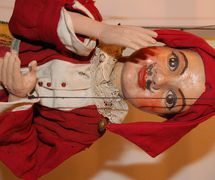 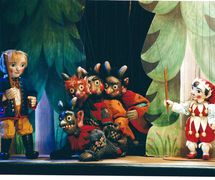 A comic character of Czech puppet plays. In the second quarter of the 19th century, the Kašpárek character replaced the original comic figure of Pimprle in the plays of Czech folk puppeteers. Of the several theories on the origins of his name, historians tend to agree on the version which derives the name Kašpárek from the Austrian Kasperl, a comic type of the Viennese suburban theatre. The Czech character appeared for the first time at the end of the 18th century on the boards of the actors’ theatre at the Vlastenské divadlo (Patriotic Theatre) in Prague.

In Czech puppet plays, Kašpárek was portrayed as a weak man with a contradictory character, wavering between courage and cowardice, sacrifice and laziness, and greed. Kašpárek usually succeeded in tricking his rivals by his cleverness, finally earning general sympathy from the audience because of his honesty. His pragmatic approach to life reflected the attitudes of his audience. Thus he served as an ideal intermediary between the puppeteer and his public, playing the role of the man of common sense, calmly approaching life with all its vicissitudes and perils, unlike the characters of fiction and romance of the period. Indeed, Kašpárek often parodied the actions and attitudes of romantic heroes.

In the early 20th century, Kašpárek had become the darling of children in amateur theatres for young audiences. This is where his principal transformation took place. Of his original appearance, only his small stature, his traditional suit with his cap fitted with small bells had remained. He had become an unambiguously positive character, a cheerful young man who lightened with his jokes the usual moralizing, pedagogic focus of most repertoires for children of the period. In the 1930s, and in spite of his considerable popularity with young audiences, a number of puppeteers considered Kašpárek an anachronism, and tried to replace him with more modern characters.