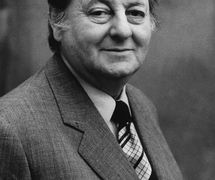 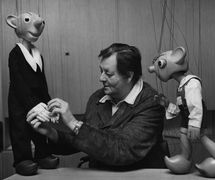 Czech puppet theatre actor, director, and author of puppet theatre plays. In 1951, Miloš Kirschner was hired by the Prague Divadlo Spejbla a Hurvínka (Spejbl and Hurvínek Theatre) as an actor where, under the leadership of Josef Skupa, his talent for playing the voices of both Spejbl and Hurvínek puppets quickly developed. After Skupa’s death in 1957, Kirschner became the main interpreter for both puppet characters, and, in 1966, he became manager of the theatre. He also wrote the dialogues, alone or as co-author, and introduced a very particular type of humour in the puppets’ expressions. He thus contributed to their gradual transformation, which had become necessary with the changes in society and in audiences, changes that had already started during Josef Skupa’s lifetime.

The character of Spejbl lost its small-town characteristics and the tension present in conflicts with his son Hurvínek were softened in favour of shared meditations on the state of the world, using a philosophy of life between humour and sentiment, thus creating the basis for the success of plays such as Srdečné metamorfóry (Sincere Metamorphoses, 1964) and Amorosiáda (Amorosiada, 1966), which he wrote together with Miloš Haken.

In his repertoire of the 1970s, Miloš Kirschner mainly focused on the young audiences he had won over with his kind and accessible humour. With his wife Helena Štáchová, the interpreter of the character of Mánička, he recorded a large number of albums and cassettes for children that were often broadcast on radio and television. Because of the popularity of Spejbl and Hurvínek, he also gained recognition abroad. He was able to prepare dialogues in the language of the host country (he prepared Spejbl and Hurvínek dialogues in eighteen languages), thus helping to spread the art of puppetry.

Kirschner was undeniably a worthy successor of Josef Skupa, following the latter’s example by intuitively developing the pair of protagonists for contemporary audiences as well as finding substitutes for character types that had become anachronistic in the 20th century, including those of Kašpárek and Škrhola. With his sensitive and creative approach, Miloš Kirschner managed to safeguard Spejbl and Hurvínek who, thanks to him, are characters still alive today in Czech puppet theatre.