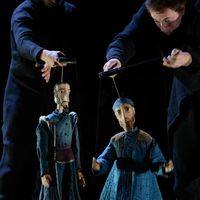 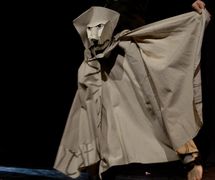 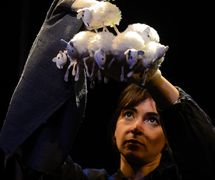 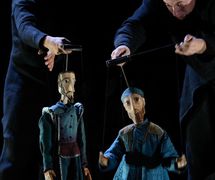 French puppet company. The Arketal Company was founded in 1984 by Greta Bruggeman and Sylvie Osman, both trained at the Institut International de la Marionnette (IIM, International Institute of Puppetry) in Charleville-Mézières, France, by Margareta Niculescu, Michael Meschke, Henryk Jurkowski and Jan Dvořák. Since 1990, Arketal has had its headquarters in Cannes, in southern France.

The company, an association of puppeteers, actors, authors, musicians, stage designers, painters and sculptors, has produced, to date, twenty-eight puppet shows for adults and children. Each creation represents a dialogue between collaborators. In each of its productions the company questions the human condition, with such themes as identity, memory, exile and family.

Arketal’s collaborations include the Ramayana, directed by Michael Meschke, which was created in Thailand and toured Japan, Sweden, Germany, Greece, Paris. Other collaborations are La Légende irlandaise (The Irish Legend), based on W.B. Yeats, also directed by Michael Meschke, and Pourquoi j’ai mangé mon père (The Evolution Man: Or, How I Ate My Father), adapted from Roy Lewis, directed by Yves Borrini, created in Cameroon, and toured the Central African Republic, Chad and France.

Parallel to creation and performance work, the company opened L’Atelier d’Arketal (The Arketal Workshop/Studio) in 2002, a studio for puppetry research and training. The studio focuses on professional audiences – puppeteers, actors, plastic/visual artists, and stage designers. The objective of the Atelier is to transmit construction, performance and staging techniques, while allowing participants to share their knowledge and participate in an exchange of experience. The influence of L’Atelier d’Arketal has been extended abroad through regularly scheduled trainings, exhibitions and other activities in Spain, Greece, Haiti, Lebanon, Israel, and Finland.