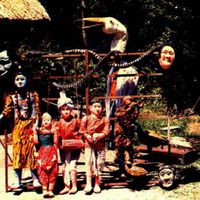 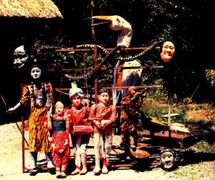 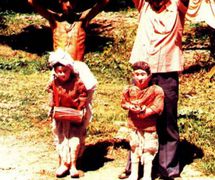 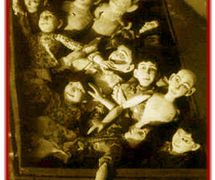 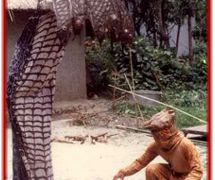 Traditional string puppet theatre from Manipur, a state in the north-eastern-most point of India, near Burma (Myanmar). The puppets have a decidedly religious character, in shape and form evoking the grace of temple sculptures. The inhabitants of Manipur are devotees of Vishnu, worshipping their god since the 17th century in part through the intermediary of doll-like figures considered divine.

The laithibi jagoi (also called laithibi jagol) puppets found their present form during the 19th century. The Rasleela, dramatizations of the birth and childhood of the god Krishna (avatar of Vishnu) are at the heart of outdoor performances during religious festivals. Demon characters, represented by life-size costume-masks, intermingle with puppets that are manipulated from a platform set up 2 or even 3 metres from the ground. A black fabric drops from the platform down to the ground. The puppets, suspended by black strings that become invisible against the dark backdrop, almost touch the ground. Seated on the floor, the spectators cannot see the puppeteers hidden by another black fabric stretched over the platform. This setup obstructs the view of the puppets from the puppeteers who often use their intuition in order to handle this difficult manipulation.

Today, the performers of laithibi jagoi are recognized in their communities and sometimes nationally for their contribution to the art of puppetry.