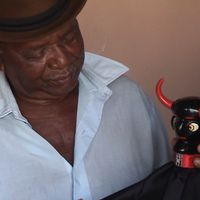 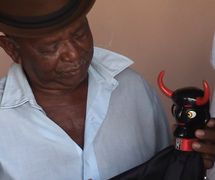 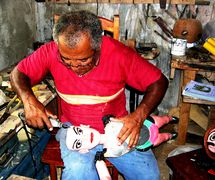 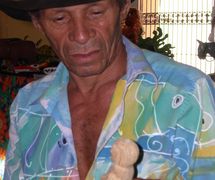 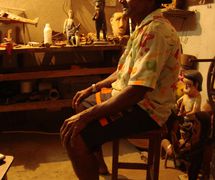 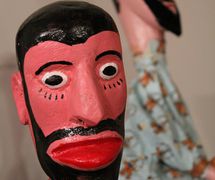 Form of popular Brazilian puppet theatre, which was developed in the region of Nordeste (Northeast), mainly in the state of Pernambuco. Although the name “Mamulengo” is taken as a reference to the puppet theatre in the Northeast in general, it is important to note that it concerns mainly the state of Pernambuco. In other northeastern states, the puppet theatre is known by the names of characters: João Redondo and Calunga (in Rio Grande do Norte); Babau (in Paraíba and Pernambuco); Casemiro Coco (in Ceará and Maranhão). It is also important to note that they are not isolated traditions. They share mutual influences.

Diverse hypotheses have been put forth regarding its origins. According to one hypothesis, the mamulengo would have surged under the influence of presépios de fala (talking crèches; see Nativity Scenes) with string puppets or rod puppets, or even casas de farinha (flour houses), a kind of show worked either mechanically or manually. But one could also say that mamulengo derives from pastorais (pastorals), popular shows presented with actors, and then with wooden puppets. The etymology of the word is obscure. According to some researchers the word mamu could be a diminutive form of Manuel, the first name of a puppeteer, better known as Mané (diminutive of Manuel) Gostoso, while the ending lengo could have a link to the expression lenga-lenga (incessant to and fro movement) or even with the expression mão molenga (indolent hand).

As is the case in every kind of popular theatre, the characters of mamulengo represent well-defined social types from all social classes, from the most humble (almost always represented by black puppets) right up to the proprietor, while also representing those like the doctor, the dentist or the police officer. Amongst the most well-known characters that appear are, on the one hand, Benedito the Negro, very modest yet at the same time very cunning, and, on the other hand, the captain João Redondo, boss and arrogant country squire, representing political power. These two figures could appear under other names like Nego Tião, Professor Tiridá, Cabo 70 or Simão. On the other hand, Quitéria is the name most often given to the female character. One can see the resemblance between these emblematic characters and those of European puppet theatres, like Pulcinella, Polichinelle, Punch, Kasperl or Guignol, in the fact that they perform a similar function, one of satire or even subversion.

The mamulengo theatre incorporates some mythological figures, even medieval elements and abstract ideas like the Devil, vampires, Death, and the Soul of the Dead. Animals also have a symbolic role: the serpent (or the caiman) incarnates an evil spirit and is always linked to the idea of original sin, whereas the bull is the symbol of both hope and of oppression.

The shows contain numerous fight sequences, ending almost always “in blood”. Once puppets have killed one another, two more puppets arrive on stage with a net to pick up the bodies. The music is an integral part of the shows, and it is to the beat of the baião, forró or of the xaxado (musical styles of Northeastern Brazil) with accordion, drum and triangle, that the scenes unfold, alternating with animated action behind the booth (see also Puppet Stages), all orchestrated by the mamulengueiro (mamulengo player) or the mestre (master). Some of the most famous mamulengueiros are Babau (Severino Alves Dias), Zé da Viña (José Severino dos Santos), Mestre Luis da Serra (Luiz José dos Santos), Ginu, Cheiroso, and Mestre Solon.

But the mamulengueiro is not a simple presenter or actor; in fact he thinks in a quasi-mystical manner, being possessed by the soul of the animated creatures. A show can last from two to eight continuous hours, and since it is based largely on improvisation, it requires intense participation from the public. Some members of the audience have a conversation with the puppets and even offer them food. In the farms and villages, a mamulengo show is a highly awaited event, and the close complicity between puppets and public explains the fact of surveillance by the authorities, because behind the laughter slides in criticism and revolt.

The mamulengo puppets are quite primitive and, for the most part, are made of mulungu wood by the puppeteers themselves. Mamulengo consists of glove puppets animated by three fingers, namely the thumb and the little finger for the arms and the index finger for the head, and rod marionettes with varied controls: one with the rod fixed between the legs, another with a rod attached to the back with one to each of the feet to animate them. More rigid figures, like policemen and soldiers, can be suspended by a rod fixed on to one of the legs. More sophisticated ones, personalities like Simão, have articulated mouths, tongues and even eyes – they can stick out their tongue and can blink. The show takes place in the open, where the stage is generally about 2 metres high, 1.50 metres deep, often decorated with bright colours.

In the meanwhile, this corresponds to a reality, which is less harsh. In the beginning of the 21st century the public that came to watch a mamulengo show became increasingly scanty. This popular art bore the full brunt of changes in society and began to disappear from town squares, fairs and festivals of the North and the Northeast. Attempts to introduce mamulengo in urban centres led to poor results, and one could say that without certain initiatives for the preservation of this art form, its existence would be in danger. As Álvaro Apocalypse underlines the fact, the danger lying in wait for mamulengo, as for all popular art, is “to become fossilized or crystallized in its traditional form, and to remain fixed and unchanging, and to submit to all the changes in the values of the social system from which it arose”. Looking at it from a dramatic perspective, “if one admits that its oral nature and improvised form have become crystallized, then the mamulengo art form can contribute only marginally to deepening knowledge regarding artistic creations. It can, all the same, serve to inspire newer art performances”.

Nonetheless, mamulengo is still alive and remains the richest form of popular puppet theatre in Brazil.