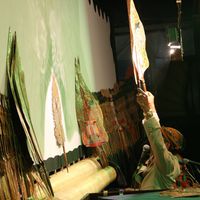 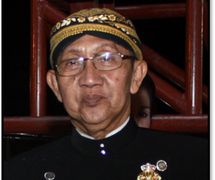 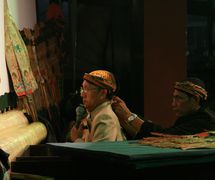 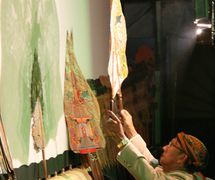 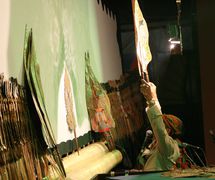 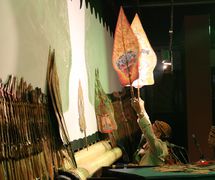 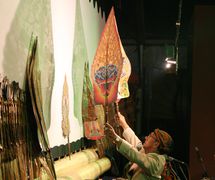 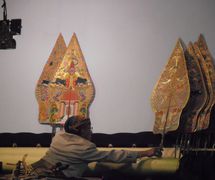 Indonesian puppet master (dalang) of Javanese wayang kulit purwa (shadow theatre). Coming from a dalang lineage, Dalang Manteb Soedarsono is son of the puppeteer Ki Hardjo Brahim Hardjowijoyo and his musician wife Ni Darti (Ki is the epithet of respect accorded to a senior dalang). By the age of twelve, Manteb Soedarsono gave his first performance. In his youth, he studied with Ki Warseno Kethek of Wonogiri, a dalang known for his sabatan (puppet manipulation). Later, he studied with Ki Nartosabdho and Ki Sudarman Gondodharsono of Semarang.

In 1972, Ki Manteb won a Surakarta dalang competition and soon was a household name. He earned the nickname “dalang setan” (devil puppet master) from his amazing dexterity at manipulation during fights and dances of his figures. His work is innovative. His fight sequences are influenced by kung fu films. His dramaturgy includes filmic conventions such as flashbacks rather than following wayang rules. His coloured lights, projections, and non-standard instruments (cymbals, violin, and trumpet) performing with the gamelan (classical Javanese orchestra) initially rattled purists but have become standard musical practice. He claims sixty students. His Celeng Degleng (Hunting the Wild Boar) was inspired by a painting of Djoko Pekik and in Wayang style was intended as an exorcism of the corruption and injustices of the New Order regime of President Suharto (Soeharto) from the late 1960s through 1998.

From 1983, Ki Manteb began having wayang performances at his home on selasa legi (day which corresponds to his Javanese birthday). These meetings, where different dalang performed, became important moments for sharing the arts and building the dalang and music community. In 1987, he innovated by telling the story of Bima in twelve episodes for a Jakarta Wayang event. In 1998, during the Asian financial crisis, he performed Rama Tambak (Rama Builds a Bridge). He includes anti-drug messages, family planning or advertisements in wayang performances for aspirin companies. Suharto’s government supported this colossal wayang to inspire the Indonesian people to work together to overcome the constraints and austerities imposed by the World Bank recommendations. In 2004, at the Indonesian Museum of Records, Ki Manteb performed a twenty-four hour and twenty-eight minute wayang to set the world record for the longest dalang performance.

Ki Manteb Soedarsono has performed in the United States, Japan, Suriname, and all over Europe. He represented Indonesian dalang when wayang was acknowledged as a UNESCO Masterpiece of the Oral and Intangible Heritage of Humanity (2003). In 2010, he won the Nikkei Asia Prize Award from Japan.