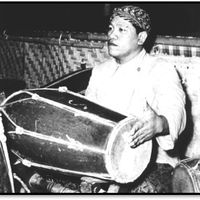 Indonesian puppetmaster (dalang)  and innovator of Javanese wayang kulit purwa (shadow theatre). Born Sunarto to an impoverished family in Central Java, he showed interest in the arts from an early age. Unlike most dalang of his era, who were born into families of puppeteers, he was self-taught. Still, he acknowledged Ki Ngabei Wignyosoetarno, of Surakarta, and Ki Poedjosoemarto, of Klaten, as influences (Ki is an epithet of respect accorded to a senior dalang). Perhaps his position as an outsider made him more flexible in moulding the wayang kulit purwa shadow theatre to the needs of post-colonial Indonesia.

Sunarto worked in various musical groups and the  popular ketoprak theatre in his adolescence. After being hired in l945 as drummer of Ngesti Pandawa Wayang Wong (dance drama) Troupe in Semarang, which became his home, he was given the name Nartosabdho (1948). He sometimes also danced clown roles. He was noted for musical borrowings from other islands of Indonesia as well as from the West. His sexy comic scenes and pan-Indonesian sound were looked down upon by connoisseurs but embraced by the people. By the 1950s, he combined the roles of dalang (narrator) and drummer in this dance drama that shares repertoire and style with wayang puppetry.

Nartosabdho next moved to the more challenging role of puppeteer. He “studied” by watching Dalang Ki Poedjsoemarto perform. Nartosabdho played in this puppetmaster’s gamelan (gong-chime orchestra). In l955, at the 200th anniversary of the court city of Yogyakarta, Nartosabdho gave his first performance, Kresna the Messenger. A national radio (Radio Republik Indonesia or RRI) presentation in l958 won him wide acclaim. By 1969, he performed regularly with his own gamelan troupe Condong Raos (Harmonious Feeling). Ki Anom Suroto, a more conservative dalang whose politics and style endeared him to the Suharto government in the l970s and l980s, was more likely to be sent by the government on international tours, but Nartosabdho’s puppets sang with the heart of the people. He helped establish invented stories (lakon karangan) as the new, narrative norm. Puppeteers, including Ki Manteb Soedarsono, acknowledge his influence.

Ki Nartosabdho was an outsider. His early training was music rather than puppetry. He mixed the less known Yogyakarta-style with that of Surakarta performance which dominates Javanese wayang. But he ultimately turned the wayang establishment inside out. In the first decades of the 20th century, his once daring innovations are now taught to students as classics of the art.