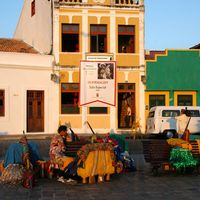 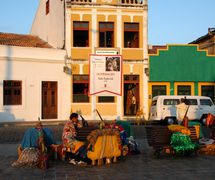 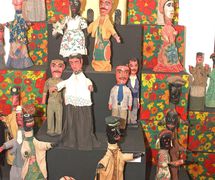 Brazilian museum founded in 1994 in Olinda (Pernambuco State). Museu do Mamulengo (Centro de Documentação Espaço Tiridá, named for Professor Tiridá, a famous mamulengo theatre personality) has been set up in a late 19th century house. This space has been conceived as a “living museum”, where the puppets take on a life of their own and interact with the visitor in a playful manner. In order to preserve and encourage popular Brazilian culture, and more specifically, mamulengo theatre, the museum houses the works of master mamulengueiros past and the present.

The collection comprises about 1,200 pieces and the treasure is regularly upgraded by the acquisition of contemporary pieces. Other than precious and rare pieces from the 19th century, the museum possesses four engenhocas, puppet ensembles animated with the help of rods and other mechanisms. For the most part, the puppets come from the Zona da Mata (erstwhile sugar zone of the Pernambuco State) and belonged to the troupe Mamulengo Só-Riso which gave them away to the Fundação Joaquim Nabuco (Joaquim Nabuco Foundation), after which they soon became a part of the museum collection, which is the only space in Latin America reserved for the conservation of mamulengo art.

The museum is equally devoted to promoting research about traditional and contemporary mamulengo, bringing together masters and apprentices in order to stimulate the permanence of this popular theatrical manifestation.