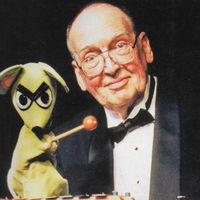 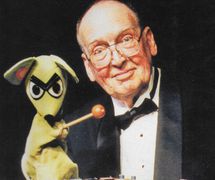 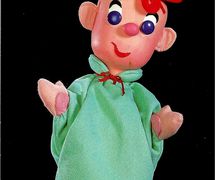 George Latshaw worked in a wide range of styles. He created large bunraku-style puppets for Billy the Kid, performed with the Detroit Symphony, and gave intimate, stylized work for adults, such as Hand in Glove based on William Shakespeare’s The Taming of the Shrew. His signature character Wilbur, a glove puppet, is on exhibit at the Center for Puppetry Arts in Atlanta.

He has twice represented the United States at the International Puppet Festival held in Colwyn Bay, Wales (Great Britain). He inspired an entire generation of puppeteers in Puerto Rico.

His television work included a version of James Thurber’s The Great Quillow for NBC in 1963, the story of a toymaker who frees his town from a hungry giant. He has written plays for puppets and actors including The Bear that Played the Bijou and Pinocchio. He is the author of a book that became a classic, Puppetry: The Ultimate Disguise (1978) and The Complete Book of Puppetry (2000).

In 1983, George Latshaw again became the editor of Puppetry Journal, with his wife Pat acting as co-editor. Through the 1980s and 1990s, he acted as teacher, director, critic, and consultant to countless puppeteers. In 1991, he was the first director of the National Puppetry Conference at the Eugene O’Neill Theatre Center. He was honoured with the Puppeteers of America President’s Award in 1979. In 1999, the George Latshaw Award, recognizing accomplishments in writing and publishing in the field of puppetry, was established. In 2000, he was named a UNIMA Member of Honour.

For over 50 years, George Latshaw generously shared his gifts with graceful wit, hearty laughter, and elegant simplicity. He is one of the most loved and respected figures in American puppetry.