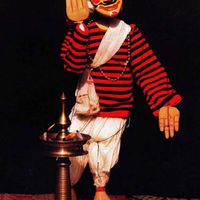 Traditional string puppet theatre from Kerala in south-west India. The oldest tradition of string puppetry in Kerala, nool pavakoothu (pavakoothu: puppet dance and nool: string), older than pavakathakali, flourished up to the 20th century in the region of Ernakulum and especially around the temple of Tripunithura, where the puppeteer-showmen performed every year during religious festivals.

Two categories of puppets were seen side by side in a performance. Smaller puppets, measuring no more than 25 centimetres, represented the classical characters from the epics Ramayana and Mahabharata. And taller, less finely sculpted and painted puppets represented comic characters who appeared in the prologues: in particular, two clowns, or vidushaka, called Koru and Unnaikan, who related their adventures as hunters pursuing a crane. The local public was especially appreciative of the puppeteers’ skill with gestural and narrative improvisation of these popular characters, and would come in droves to see the shows.

The carefully crafted articulated joints of the nool pavakoothu puppets permitted quite natural movements of the marionettes’ heads, shoulders, elbows, wrists and knees. The protectors and owners of these dolls belonged to the royal families, while the puppeteers and the musicians belonged to the Nair community. Songs alternated with dialogues in the local language, Malayalam.

Today the nool pavakoothu performances have all but disappeared but there are still forty-five puppets kept safely in the temple of Tripunithura.