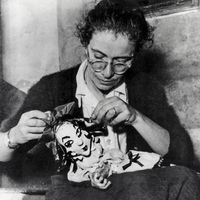 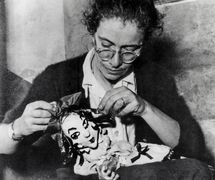 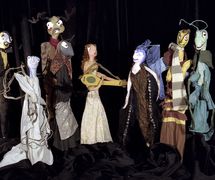 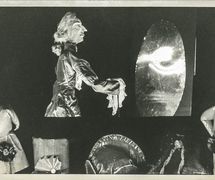 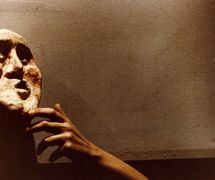 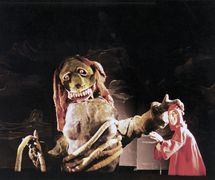 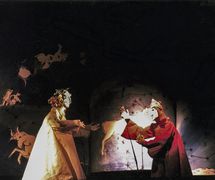 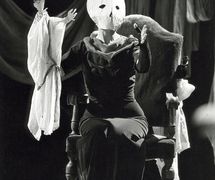 The Opera dei Burattini owes its existence to the will and the dream of Maria Signorelli “to see everything come to life and speak”. Every puppet had its own identity and was created for a specific show (today there are over 2,000 after 167 productions) and they were quite different from traditional puppets. The basic construction employed fabric, colours, threads and papier-mâché to convey the essence of the character to which they gave a shape.

The productions of the Opera dei Burattini were characterized by the choice of subject and by an attempt to find formal perfection in staging, scenery, music and performance. As for the repertoire, designed for both children and adults, it departed considerably from that of the traditional puppet theatre. It was made up not only of fairy tales, nursery rhymes, myths and legends, but also of classic texts, both Italian and foreign, and of operas and ballets. To this can be added some fifty ballets based on well-known scores or with music specially composed by Alfredo Casella, Lidia Ivanova, Ennio Porrino and Roman Vlad among others.

In 1974, Giuseppina Volpicelli took over the direction of the company, working with the actors, including her sister Maria Letizia, so as to continue not only the theatrical line followed by her mother, but also drawing in authors, directors and musicians, whether famous or not, with the aim of opening up her stage to original Italian and foreign work, conceived for this type of theatre.

However, Maria Signorelli continued to build all the puppets and to make the props. The first show, Biancaneve chi la beve (Snow White, who believes in that sort of thing now?, 1974) by Barbara Alberti, reflected the feminist themes of the period; Snow White embraced the prince, whom she then refused to marry. Shows such as L’arca di Cioè (a play on “l’arca di Noè”, “Noah’s ark”, and “Cioè”, “that is”, 1974), and Il cerchio magico (The Magic Circle, 1975), directed by Silvano Agosti with music by Arturo Annecchino and Irio De Paula, were performed with the participation of audiences who went out of the theatre and into the streets together with the puppets.

Over the following years there were about two new productions each season, including Pantomime futuriste (1977) by Francesco Cangiullo using puppets and dancers (direction and choreography by Albert Testa); Alice (1978) by Lewis Carroll (directed by the painter Dario Serra) using white soft sculpture puppets highlighted with dashes of colour; Luisa col vestito di carta (Luisa Dressed in Paper, 1979) by Alberto Arbasino using paper puppets operated by bare hands; Signori la Marionetta! (Gentlemen, the Marionette! 1980) by Edward Gordon Craig, which was presented in New York the following year; Una favola per Klee (A Fable for Klee, 1980) by Pinin Carpi, a musical comedy in which the pictures of the great painter came to pieces and turned into puppets; L’uovo misterioso (The Mysterious Egg, 1990), a Croatian tale directed by Sea Sadic; Puppets Opera (1994), directed by Roberto Marafante, a history of puppets from the beginnings to the present.

In 2005, the Opera dei Burattini had some fifty productions to its credit, including Allegro con brio, a music-hall show presented throughout the world at dozens of festivals. In 1986, the company took up residence in the Teatro Verde in Rome, performing to fifty thousand spectators a year and having on its bill twenty-three or twenty-four new productions, both Italian and foreign.