The Public – The Audience 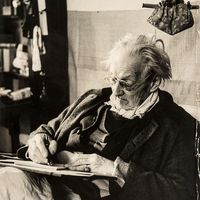 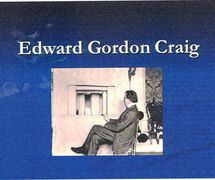 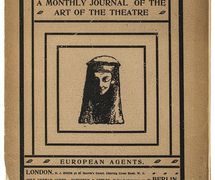 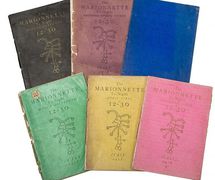 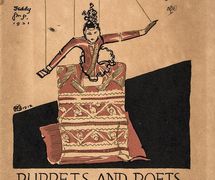 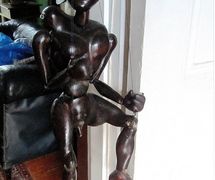 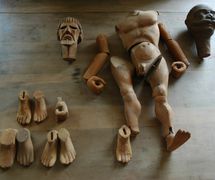 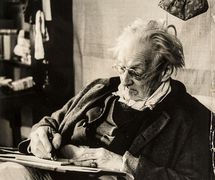 British scenographer, director, theoretician and author, also fine artist and actor. Only son of the actress Ellen Terry and the architect and stage designer Edward Godwin, Edward Gordon Craig was schooled in Bradfield and Heidelberg. He began his theatre career in Henry Irving’s company at the Lyceum, London, and on tour with other companies until he was 25 when he turned to art and music.

After staging a number of his own productions in London, acclaimed by the critics but ill attended by the public, he followed a career on the European continent, making a living with the sale of his wood engravings and formulating and publishing his revolutionary theories on the art of theatre. These have proved enduring throughout the Western world.

In reaction against the naturalism and literary dependence of mainstream theatre, and also the domination of the actor, he developed radically original concepts of staging and design, in tune with the Modernist credo which believed in Art as artifice. He was the first to propound the need for artistic control of every aspect of a theatre production by a single person, first identified by him as “the artist of the theatre”, forerunner of the present-day director.

His thinking led him to a theory of the ideal performer, the “Über-Marionette” or super-puppet, since unity of style which he sought, in design, scale and acting, without the intrusion of realism or personality, was attainable only through the controllable figure rather than the wilful human (see Heinrich von Kleist, Alfred Jarry). However Craig later modified the idea from a literal to a metaphorical concept.

His experiments and uncompromising ideas won him few followers in Britain, except among the fine-arts community, whereas leading theatre artists of other European countries afforded him recognition as the prophet of a reformed era of theatre. As a director, insisting always on absolute control, Craig demanded too much from most theatre managers. His design inventions were often expensive and technically difficult, and the performers’ freedom to express themselves as they were used to do was severely curtailed. Konstantin Stanislavski, however, offered him the Moscow Art Theatre in which to present his most famous production, Hamlet (1912), which greatly influenced the young Vsevolod E. Meyerhold and delighted the Moscow critics and indeed commentators from many other countries.

After settling in Florence in 1907, Craig published his ideas and opinions in essays for magazines, including The Mask, which he produced himself, irregularly, between 1908 and 1929. Many of his articles were printed under pseudonyms (he confessed to sixty-six).

His interest in puppetry was constant throughout his life, and he accepted the honorary office of President of the British Puppet and Model Theatre Guild, between 1928 and 1936, and Member of Honour of UNIMA. However, he was scornful of the work of the professional puppet showmen (“all puppets are now but low comedians”).  He was to the end a devotee of the model theatre, the latter being his preferred method for the development of his scenographic ideas, the choreography of the performers being represented by cardboard silhouettes.

His fascination with the puppet resulted in twelve issues (1918) of another periodical called The Marionnette (sic). In these he included five original plays or “motions”, typically difficult for puppeteers to understand or stage.

One of Craig’s beliefs was that the marionette was an incarnation of all that is spiritual and dignified in the human form, “the last echo of some noble and beautiful art from a past civilisation”. He was to some extent responsible for the interest taken in the puppet by many fine artists of the Modernist era such as Pablo Picasso, Fernand Léger, Paul Klee, Oskar Schlemmer (see Bauhaus) and Alexandra Exter, although for most of them, including Craig, their interest was more theoretical than practical.

Craig’s last production was in Copenhagen in 1926. He remained in self-imposed exile in Italy and France until his death at the age of 94. In spite of his succes d’estime throughout Europe, Britain hardly acknowledged his theatre genius during his lifetime. The disappointments of his private and professional life multiplied, as in the 1914 termination of his cherished project to establish a theatre school in the Arena Goldoni near Florence.

His final project was developed over 50 years and remained uncompleted at his death. Craig described it as a play in 365 “motions” for puppets, which he intended to write, design and build in model form. Recently more of these “motions” have been acquired by the French Institut International de la Marionnette, but the whereabouts of others of the series or of some of his model sets is not yet established. London’s Theatre Museum has a superb example of one such model.

Among Craig’s most important writings are “The Actor and the Über-Marionnette” in The Mask, Vols. I and II, April 1908 (reprinted with notes in On the Art of the Theatre, Heinemann, London 1911); five plays or “motions” for puppets (all previously published individually), together produced under the title, The Drama for Fools, by Tom Fool in 1918, viz. Mr. Fish and Mrs. Bones, The Gordian Knot, The Tune the Old Cow Died of, The Three Men of Gotham, Romeo and Juliet; and in 1919 School, or Thou Shalt Not Commit.

The British honoured Edward Gordon Craig with the title of Companion of Honour in 1956.