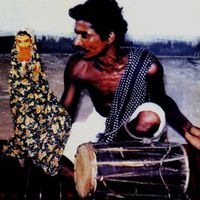 Traditional glove puppet theatre from Orissa (Odisha) on the north-east coast of India, also called kundhei nach. Though they are numerous throughout the state of Orissa, glove puppets are generally concentrated in the region of Cuttack. Some of the puppeteers, who are poor farmers, own tiny shops in their village. They believe that in olden times they belonged to the warrior caste (rajputs) and that they had migrated from Vrindavan, birthplace of Krishna (incarnation of god Vishnu), more than two centuries ago. Their sole repertoire, the Sakhi nach recounts the amorous adventures of Krishna, his beloved Radha, and the cow herder girls (gopis).

The puppet representing Radha, with her little circlets of bells at her wrists and under her skirt that ring as she moves, is named Chandra Badani (Face-like-the-Moon). The wooden puppets, sumptuously dressed, have expressions that can convey one or many emotions.

The puppeteer, usually a solo operator, manipulates the puppets with his right hand and plays the dhol (hour-glass-shaped drum), attached to his hip, with his left hand. At the same time, he sings popular melodies in the Oriya language, derived from medieval poetry, to support the episodes from texts such as Vastraharan, Radha Krishna Milan and Navkeli that relate the exploits of Radha and Krishna, who, in this charming dramatized portrayal, are treated as simple adolescent villagers.

Today, there are troupes and traditional families performing sakhi kundhei, some of whom are master puppeteers recognized locally and sometimes nationally for their contribution to the art of puppetry.