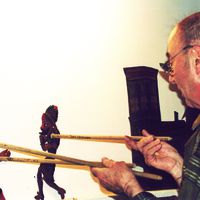 After many shadow play performances (see Karagöz) he joined the State Theatre in 1972, and the Ministry of Culture in 1975, where he was in charge of performance (figures, scripts, and manipulation). In 1976, he created the theatre which carries his name: Tacettin Diker Kukla Tiyatrosu. He participated as puppeteer in the Istanbul International Festival of Art and Music, in fairs at Izmir, Bursa, and Kocaeli, at Nasreddin Hoca festivals (also Nasrettin Hodja, 13th century satirical Sufi and populist philosopher, and a character who appears in thousands of tales; the International Nasreddin Hoca (Hodja) festival is celebrated July 5-10 in his hometown every year), and at children’s festival events at Mersin, Muğla, and Antalya, where he was puppeteer.

A member of UNIMA Turkey, Tacettin Diker has given a number of international performances and regularly performed in Germany between 1978-1985.