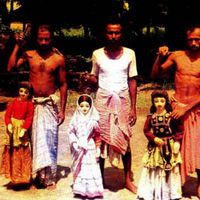 Traditional string puppet theatre from West Bengal in north-east India. Present day itinerant troupes of tarer putul (putul, doll and tar, string) comprise about a thousand people, touring Bengal as well as Orissa (Odisha), Assam and Tripura. These are usually large companies, like a circus group, made up of the performers, their families, cooks, carpenters, and others involved in the shows. The companies would travel with large tents that are pitched in a certain place. Once the performances had begun, the carpenters would move to another venue and set up a parallel tent. When the show had concluded in the first area, the performers would move to the second site, and the carpenters would clear the first area and pitch the tents for the next show. The shows were long, full-length productions with multiple sets.

The tarer putul puppets, measuring roughly 30 to 40 centimetres high, are sculpted in wood or modelled from papier-mâché and are dressed sumptuously like the actors of the jatra, the popular folk musical theatre of Bengal. At least six strings are required to manipulate each puppet: two for the hands, two for the head, one for the chest and one for the back. However, there is one particular character, that of an acrobatic puppet known as Bhanumati, which requires eighteen strings. These are linked to a chath, a 40-centimetre-long piece of bamboo that horizontally hangs at the same height as the puppeteer’s chin. Even though the members of the troupe construct a stage surrounded by curtains, quite often the puppeteers, mostly men, manipulate in full view of their audience.

The texts from the jatra are sung in Bengali, accompanied by a fiddle-like instrument, flute, cymbals, gongs, a harmonium and a pepper shaker, which give way to texts sung in Hindi outside the borders of Bengal. The members of the troupe call out to their audience from their stage-tent, and distribute colourful pictures, just like buskers did in the days of popular cinema.

Each show lasts between thirty to forty-five minutes. The lead puppeteer could have anything between twenty-five to forty plays memorized.

Today, there are troupes and traditional families performing tarer putul nach, some of whom are master puppeteers recognized in their communities and sometimes nationally for their contribution to the art of puppetry.